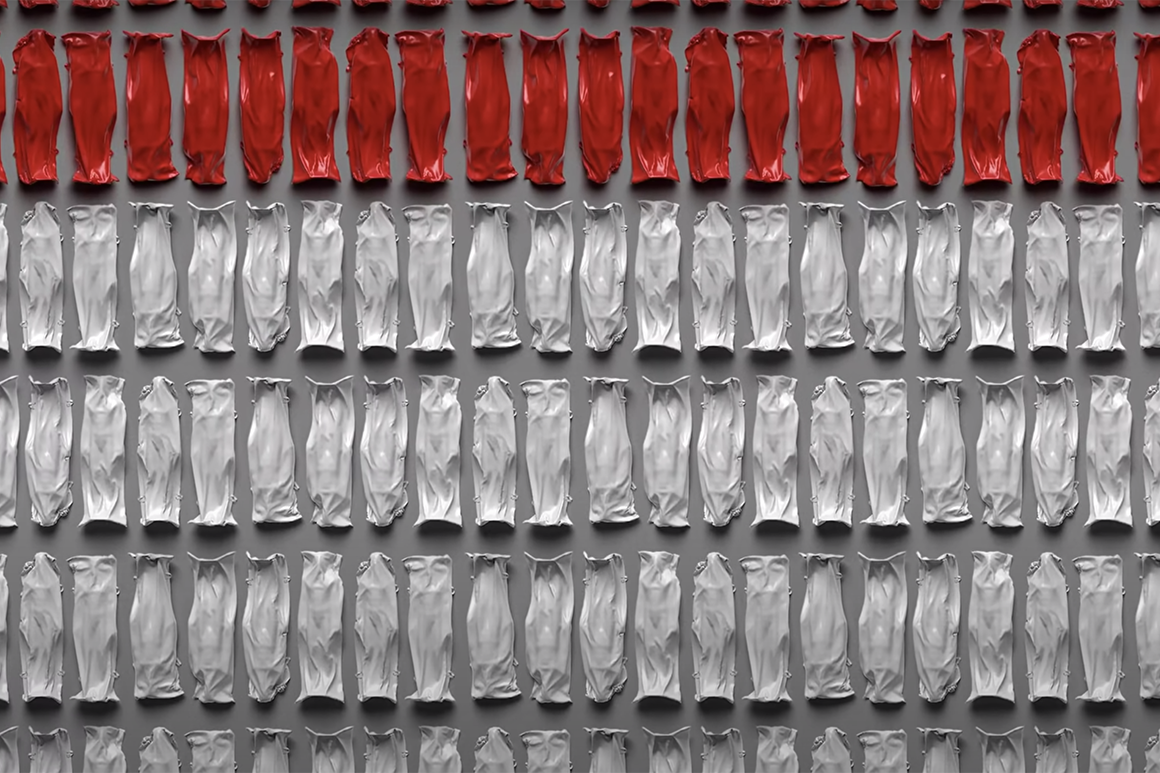 “100,000 Dead,” an ad from the anti-Trump super PAC known as The Lincoln Project, comes at you like a miniature horror film. It starts with a shot of seven white body bags, detailed enough that you can see the outline of limbs underneath, and the voice of President Donald Trump at a press briefing in February. The nation’s Covid-19 caseload will soon be “close to zero,” Trump says; his words repeat in an increasingly distorted voice, as the camera pulls back to reveal row upon row of body bags in the shape of an American flag. New words land on the screen with audible thumps: “100,000 dead Americans. One wrong president.” It ends with the faint sound of wind whistling, as if through a graveyard.

Down to the smallest detail, it’s a masterful nugget of compact filmmaking. And it helped draw attention to a renegade corps of Republican strategists, veterans of campaigns for George W. Bush, John McCain and Mitt Romney, who are applying their attack-ad skills to their own party’s president—and going for the kill shot, every time. “Mourning in America,” their ad released in May, starts with a pointed reference to the Ronald Reagan slogan, then blames Trump for the full range of post-Covid despair, using images of hospital hallways, decrepit buildings and an upside-down flag. (Facebook slapped the ad with a “partly false” warning label, since it assigns Trump all of the blame for relief bills that were passed by the vast majority of Democrats in Congress.) “Debt,” released in late June, starts off like a History Channel documentary about the sacrifices made during World War II, and ends with an image of a Greatest Generation member, hooked up to a ventilator.

Some of the ads are running on TV, on Fox News or in battleground states. Some are simply released online, at a rapid pace. Many are based on assumptions that may or may not turn out to be true: that swing voters will be as unforgiving as Democrats about Trump’s Covid response, for instance, or that they’ll be any more bothered by Trump’s coarse rhetoric than they were, or weren’t, four years ago. Still, the Lincoln Project is clearly getting under the skin of the president and his supporters. And the evidence is not just raging tweets; in one of those Washington funhouse mirror moments, the Trump-friendly super PAC Club for Growth just released an ad attacking the Lincoln Project founders as if they were candidates themselves.

How has one renegade super PAC managed to trigger Trump and his allies so thoroughly? Part of it is surely frustration that a group of Republicans would issue a full-throated endorsement of Joe Biden. Part of it is skill: The Lincoln Project ads are slick, quick and filled with damning quotes and unflattering photos. But part of it might just be that Republicans are better at this than Democrats. Trump may sense that these ads are especially dangerous because they pack an emotional punch, using imagery designed to provoke anxiety, anger and fear—aimed at the very voters who were driven to him by those same feelings in 2016. And history, even science, suggests that might in fact be the case—that Republicans have a knack for scaring the hell out of people, and that makes for some potent ads.

Not every Lincoln Project video peddles fear. Some are traditional political ads, overenthusiastically produced and applied to issues that might irk the president: supporting Democrat Steve Bullock for U.S. Senate in Montana, attacking Mitch McConnell in Kentucky. Some are 30-to-60-second versions of the kind of schoolyard taunting you might expect from Trump himself. In “Shrinking,” released after the president’s disappointing rally in Tulsa, a female voice mocks the size of the crowd: “You’ve probably heard this before, but it was smaller than we expected.”

The group’s most memorable ads, though, are the ones that are self-serious and brutal. Within days of news that Vladimir Putin paid the Taliban to target American soldiers, the Lincoln Project released two ads that hammer Trump as a lackey of foreign enemies, using language that, in another year, Republicans might have used to make Democrats look weak. “Betrayal” features Dan Barkhuff, a former Navy SEAL who declares that “any commander in chief with a spine would be stomping the living shit out of some Russians right now—diplomatically, economically, or, if necessary, with the sort of asymmetric warfare they’re using to send our kids home in body bags.” “Bounty” starts with images of flag-draped coffins and the sound of tapping drums, then pivots to a standard attack-ad trick: carefully spliced clips of Trump and Putin at joint news conferences, the action drawn out so that every smile and handshake looks doubly sinister.

Stoking fear is a tried-and-true tactic of political advertising, stemming back to the Lyndon Johnson campaign’s 1964 anti-Barry Goldwater ad “Daisy.” But many of the most indelible ones have stemmed from the Republican camp, and over time, they’ve grown increasingly blunt. Ronald Reagan’s 1984 “Bear” ad used a grizzly as metaphor for the Soviet nuclear threat: “Isn’t it smart to be as strong as the bear—if there is a bear?” the voice over intoned. That ad inspired George W. Bush’s “Wolves” from 2004, which accused John Kerry of being soft on terrorism. George H.W. Bush’s infamous 1988 Willie Horton ad linked Michael Dukakis to a prisoner who committed brutal crimes on a weekend pass, flashing the words “Kidnapping,” “Stabbing” and “Raping” on the screen. (The ad has since been scorned, not just for exploiting racial stereotypes, but also for paving the way for tough-on-crime bills that had lasting social repercussions.)

The secret of fearmongering is a willingness to go there, and that’s where the Republicans of the Lincoln Project might have an advantage over Trump’s left-leaning opponents. The group’s founders aren’t calibrating their ads around a Democratic base that mistrusts the military, delves into nuance or shies away from causing offense. That leaves ample room for dog-whistle symbols that range from clichés to horror-movie tropes: One ad accuses Trump of being played by China and ends with the image of the White House, the entire screen tinted red.

Research shows there’s a reason these ads could be effective with Republicans voters: Conservatives are an especially fear-prone group. In a 2008 paper in the journal Science, researchers subjected a group of adults with strong political beliefs to a set of startling noises and graphic images. Those with the strongest physical reactions were more likely to support capital punishment, defense spending and the war in Iraq. A 2011 paper in the journal Cell found a correlation between conservative leanings and the size of the right amygdala, the portion of the brain that processes emotions in response to fearful stimuli. In her book Irony and Outrage, University of Delaware professor Dannagal Young points out that liberals and conservatives respond differently to entertainment rhetoric: Liberals have a higher tolerance for open-ended ambiguity, while conservatives look for closure and want problems to be solved.

That research helps explain why some attack ads move the needle with the right populations—and why some, in retrospect, don’t. Take the Hillary Clinton campaign ad, “Mirrors,” which aired about a month before the 2016 election. Hailed, in certain circles, as an instant classic, it showed a series of young girls looking at their own reflections as Trump’s voice played in the background, saying things like, “I’d look her right in that fat ugly face of hers.” Mother Jones deemed the ad “powerful”; Bustle called it “brilliant.” But it didn’t convert the white suburban women Clinton’s advisers surely hoped to reach, because it not only preached to the choir, but spoke in the language of the choir. It was too subtle, Young might say, asking viewers to connect the dots, rather than hammering in a dramatic point. And it played to voters’ conscience and values—the kinds of things voters have to think about—rather than their raw emotions.

Trump’s ads, by comparison, have required little thought; the dots are preconnected in thick Sharpie ink. His first 2016 ad, “Great Again,” touted his willingness to utter the words “RADICAL ISLAMIC TERRORISM,” which the ad displayed in all caps over images of masked fighters and photos of the San Bernardino shooters. (The same ad pledged that Trump would “cut the head off ISIS.”) His campaign’s fear-stoking 2018 anti-immigration ad, featuring an illegal immigrant convicted of murder and caravan footage that evoked an invasion, was so incendiary that many networks, including Fox News, refused to run it.

The Lincoln Project, too, knows how to deliver an unsubtle message, and Trump has given it some useful raw material. Recent news footage makes him look weak and despondent—as when he descended from a helicopter after his Tulsa rally, a MAGA hat drooping from his hand like a dead trout. (The Lincoln Project’s ad sets the scene to “Jurassic Park” theme music, played badly on melodica.) The image of Trump holding up a Bible in front of St. John’s Episcopal Church, intended as a metaphor of strength, now plays as shorthand for tone-deaf insincerity. Another ad, “#Trumpisnotwell,” mashes recent video of Trump gingerly walking down a West Point ramp with 2018 footage of him climbing onto Air Force One, with toilet paper apparently stuck to his shoe. In a line straight out of the Trump playbook, the ad suggests that the media is hiding information about his health. “The most powerful office in the world needs more than a weak, unfit, shaky president,” the narrator says, over echoing tones of slasher-movie music.

It’s enough to inspire a presidential tweetstorm, or six. Lately, Trump and his surrogates have tried to fight back, calling the Lincoln Project founders “RINOS,” painting the group as elitists who think of Trump fans as deplorables. Trump has offered counter-images: This week, he retweeted a meme of himself in an Uncle Sam pose, pointing menacingly at the camera, between the words “In reality, they’re not after me, they’re after you. I’m just in the way.”

But the genius of the Lincoln Project ads is that they’re quite specifically after Trump, using his own favored tools of shamelessness and fearmongering, and turning them back on their source. Who knows? It could actually work.

Facebook says it will label rule-breaking posts after advertisers flee