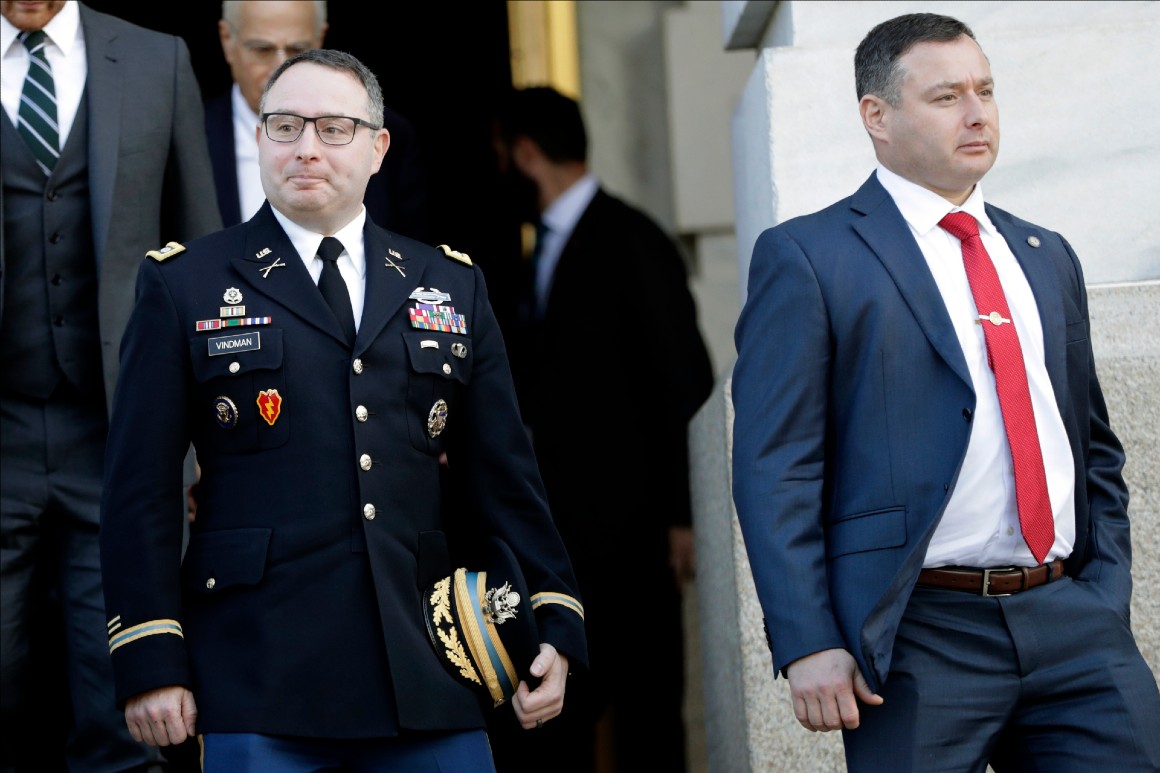 After months of silence, Lt. Col. Yevgeny Vindman has joined his twin brother Alexander in speaking out about how the two were treated by President Donald Trump.

Yevgeny Vindman recently started a new job as staff judge advocate and general counsel at the Army’s top research, development and tech engineering command in Aberdeen, Maryland. He’s also due for a potential promotion to full colonel this summer, according to a person familiar with the matter.

But that hasn’t stopped Yevgeny, who also goes by Eugene, from tweeting out numerous critiques of Trump and Esper. POLITICO verified that the account, which has a blue check mark, belongs to the same Yevgeny. In his Twitter bio, he writes that a “retweet is not endorsement” but his views are “his own."

Vindman, who was removed from the National Security Council in February along with his twin brother, a Ukraine expert who had testified in the impeachment probe, tweeted out a critical June 25 New York Times story that relayed how Esper was facing a flood of Pentagon departures as White House officials tried to purge people they believe aren’t loyal to Trump.

On June 3, he also retweeted University of Texas law school professor Steve Vladeck, who wrote in a comment on the defense secretary’s remarks pushing back on the president’s proposed use of Insurrection Act: “I’m not sure who will ultimately win the award for ‘Trump Administration Official Who Should’ve Resigned in Protest But Didn’t,’ but Esper is sure making a late push for consideration.”

In his own words, Vindman hasn’t been entirely critical of Esper. After the defense secretary said that the military should not be sent into the streets to clamp down on the protests, Vindman wrote: “The SecDef is correct. Active duty forces must not be used in a law enforcement role absent dire/cataclysmic circumstances. We are not remotely in such a situation. Correct in law and in fact.”

In late June, Yevgeny Vindman attacked National Security Council staffers who reportedly told Defense Department colleagues that they possessed evidence of misconduct by his brother Alexander that would disqualify him from being promoted to colonel. He called it a “[t]otally inappropriate and outrageous attack on Alex Vindman’s character. This is [a] political hatchet job and nothing less by unnamed NSC staff.” No evidence of such alleged misconduct ever surfaced, and Vindman added that he had “complete confidence that the Department of Defense and Department of the Army will do the right thing.”

After the White House rejected the Pentagon’s recommendation that he be promoted to full colonel, Alexander Vindman announced last week that he was retiring from the military altogether. His retirement came as Sen. Tammy Duckworth (D-Ill.) vowed to hold up more than 1,000 military promotions until Esper promised Vindman would not face retaliation.

Yevgeny Vindman joined Twitter after he and his brother were removed from the NSC. His early posts amplified criticism of Trump and shared news and pictures of his firing for a few days in early and mid-February before going quiet until early June.

He’s also amplified so-called never-Trumpers such as the conservative writer Bill Kristol, who, on the day of Trump’s visit to West Point last month, said that the president has “little respect” for U.S. Army officers serving the country such as Alex Vindman and that the “military deserves better than this president.”

His Twitter feed has touched on hot-button issues that go well beyond military matters. On Tuesday, he shared a video clip of the comedian Sacha Baron Cohen ripping Facebook for its failure to more aggressively patrol hate speech on its platform.

“Reason from an unlikely source,” Vindman wrote. “There are limits to free speech. You can’t yell fire in a crowded theater… Private FB not bound by the 1st Amendment, but moral/ethical and business interests (ad suspensions) weigh in favor of FB controlling posts.”

Vindman also has tweeted praise of his brother, sharing a quote from their onetime boss, former national security adviser John Bolton. “Look, based on not just his service but his twin brother’s service at the NSC, both of whom were pushed out of their assignments early, I think they certainly deserve promotion based on what I saw,” Bolton said during a TV interview in early July.

Yevgeny Vindman did not respond to a request for comment on his tweets, but his attorney Eugene R. Fidell said in an email: “Lt. Col. Yevgeny Vindman is confident that the leadership of the Department of Defense and the Army will do the right thing and has made that clear on his Twitter feed. Retweeting the views of others does not constitute endorsement, as his Twitter account expressly states. He is grateful for the continuing support of his fellow soldiers, his chain of command, and the many patriotic Americans who have reached out to him.”

An Army spokesperson sent along an emailed statement: “The Army requires all officers to uphold the standards of exemplary conduct and abide by the Army’s social media policy.”

Microsoft is killing off OneDrive’s ‘Fetch’ feature on July 31

Thousands protest in Israel, call for Netanyahu to resign – National