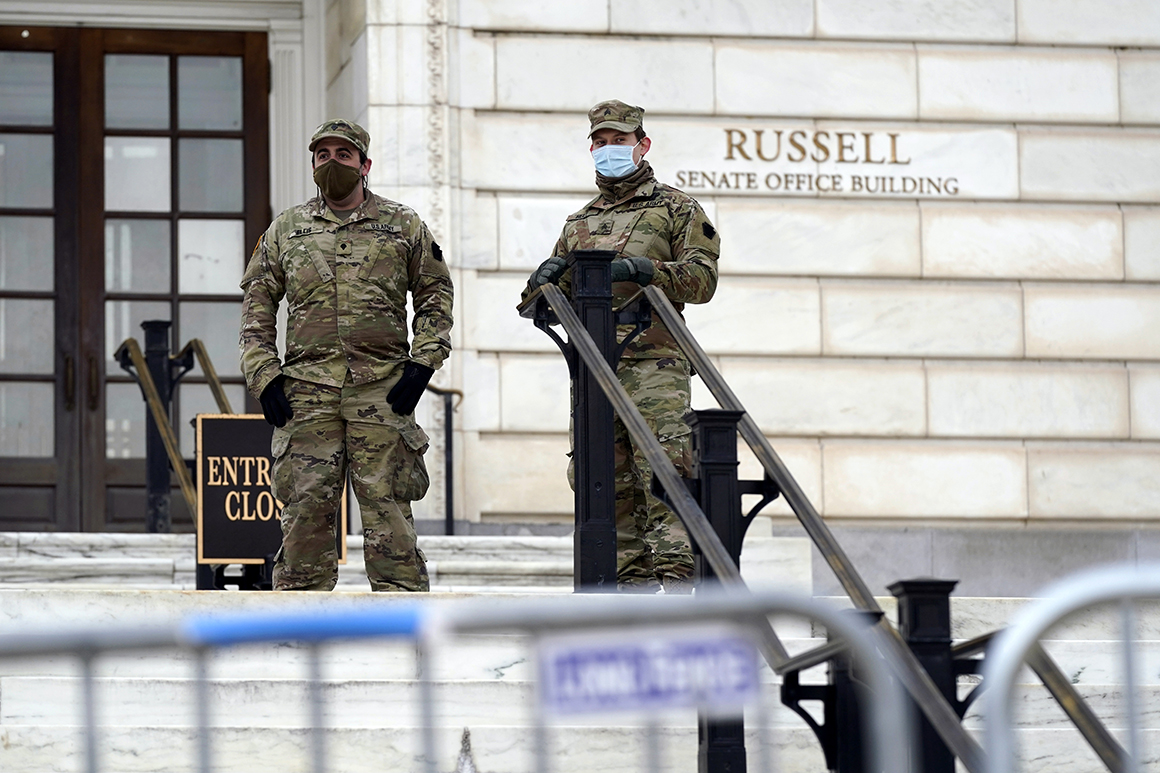 “It is clear that more must be done to preempt, penetrate, and prevent deadly and seditious assaults by domestic violent extremists in the days ahead,” the statement said.

The lawmakers voiced their concerns moments after a public FBI and Justice Department briefing revealed their belief that the Jan. 6 violence could be part of a much graver, well-organized “seditious conspiracy.”

Security at the Capitol has tightened in dramatic fashion after last Wednesday’s deadly insurrection. Before the riots, President Donald Trump encouraged mobs of his supporters — some equipped with pipe bombs and other weapons — to march to the Capitol and stop lawmakers from certifying the election. The events exposed a dangerously ill-prepared complex, rattling members and staff who had considered it perhaps the most secure place in D.C.

By Tuesday afternoon, metal detectors had been stationed at the entrances of the House chamber, a sign of the potential risks that remain for members and their staff as Washington prepares for a critical vote to impeach Trump on Wednesday. Democratic staff, who were briefed on the changes on a call Tuesday, said all members must be screened before walking on the floor and can be denied entry if they refuse.

Fear is particularly heightened around Inauguration Day, with the FBI publicly warning of armed protests in every state in the lead-up to Jan. 20. On Tuesday, Capitol Police announced major street closures that would extend through Inauguration Day, and D.C. Mayor Muriel Bowser encouraged people not to travel to the city for the event.

“Last week’s attack may not be a one-time event,” House Rules Committee Chair Jim McGovern (D-Mass.) said on Tuesday. “There are still serious concerns about another attack here in Washington, D.C., and in every corner of this country.”

Sen. Rob Portman, who has also taken part in high-level briefings, added in a statement on Tuesday that the threats of additional violence were “deeply concerning.”

Portman also said that Trump “bears some responsibility for what happened on January 6,” and he called on the president to “explicitly urge his supporters to remain peaceful and refrain from violence.“

Lawmakers, who had already been on high alert, have grown increasingly concerned amid multiple reports of specific plots against members. One FBI report, first reported by The Washington Post, stated that an online chat user had shared a map of the Capitol tunnels, as others called for a “war” at the building.

Many members were already reporting an increase in personal threats from Trump supporters and have been worried about more violence as the president refuses to take responsibility for inciting last Wednesday’s insurrection and has warned that the impeachment vote will only further anger his base.

Some of the warnings to lawmakers have been so stark that a small number of members — particularly those who spent those terrifying minutes barricaded inside the House chamber on Wednesday — have begun to raise the possibility of avoiding an in-person inauguration. Most members, however, do still plan to attend.

“It’s important to understand that the inauguration is treated as a national security event,” Sen. Tina Smith (D-Minn.) said in an interview Tuesday.

“I am planning on being there,” she said. “I think that the inauguration is the most important symbol in our country of the peaceful transfer of power. People need to be able to see that.”

Rep. Rosa DeLauro of Connecticut, a senior Democrat who attended a private security briefing in Speaker Nancy Pelosi’s office on Tuesday, also said she was “confident” the Capitol would be securely locked down for the inauguration.

“I think they’re getting it under control,” DeLauro told reporters. “I mean, the concern is obvious from Wednesday, but it’s what you do with the concern and that’s what they’re dealing with.”

In a separate briefing with House GOP lawmakers, the acting Capitol Police chief said there would be new safety measures ahead of impeachment and inauguration. Those include additional armed National Guardsmen, uniformed Secret Service officers and razor wire on the fence surrounding Capitol grounds, according to a person familiar with the discussions.

Presidential inaugurations are typically among the most secure events in the country, with teams of federal law enforcement preparing for years. The Joint Congressional Committee on Inaugural Ceremonies on Tuesday reiterated its plans to hold the event at the Capitol, noting that its security forces were “working around the clock” on preparations.

“We will be swearing in President-elect Biden and Vice President-elect Harris on the West Front of the U.S. Capitol on January 20, 2021,” the planning committee wrote in a statement.

Still, lawmakers are increasingly anxious that pro-Trump rioters are looking to Biden’s inauguration, or even this week’s impeachment vote, to continue their terrorizing campaign to impose further destruction.

On Monday night’s call, Democrats were warned that various groups — including Patriot Action for America, the Proud Boys and people involved with the Million Militia March — were potentially targeting the Capitol, the White House and the Supreme Court in the coming days, according to people on the call. They were told D.C. officials would release additional details on inauguration safety in the coming days.

House Democrats were particularly alarmed as officials told them of groups that were specifically targeting members of their party, to prevent them from going into the building. But one member said there was hardly any information about what was being done to combat the threat.

“We all want to know, so, ‘What are you doing?’” that Democratic lawmaker said.

A group of lawmakers, led by the bipartisan Problem Solvers Caucus, wrote a letter to Trump urging him to personally denounce the violence and “clearly reaffirm your commitment“ to a peaceful transition of power.

“We ask that you please address the nation and unequivocally denounce domestic terrorism, condemn harmful propaganda, urge anyone considering mobilizing to stay home,“ reads the letter, which has 30 House members as well as several senators, including Sens. Lisa Murkowski (R-Alaska) and Susan Collins (R-Maine).

Officials also used the call to outline new measures for security. Starting on Monday, Capitol security locked down all buildings to only members and staff, while many offices instructed even more of their staff to work from home. Officers from a half-dozen different units — including members of the National Guard — are on patrol of both the Capitol and surrounding streets.

“This is not just a crisis and an emergency. It is a continuing crisis and emergency,” Rep. Jamie Raskin (D-Md.) said on Tuesday, citing the accumulating threats by pro-Trump militias and other individuals in the coming days. “It is not over yet.”

“Can we say that we feel safe being in the hands of this president, with the horror and the threats returning to our nation’s capital?” Raskin added.

Washington, and the Capitol in particular, has been on high alert since Wednesday. Officials moved quickly to erect fences to secure the perimeter of the sprawling complex, where members of the public have typically been able to stroll between the Capitol and its various office buildings. Crews were seen adding more panels to those fences on Tuesday, making them even taller.

At least one of the measures, the metal detectors outside the House chamber, have drawn blowback. Rep. Rodney Davis (R-Ill.), who is the top Republican on the House Administration Committee, was overheard by reporters calling it “bullshit“ to a top Democrat.

And one freshman, Rep. Lauren Boebert (R-Colo.), appeared to refuse to allow Capitol Police to inspect her bag, which set off the metal detectors as she tried to go in, according to reporters present. Boebert has publicly called members of Congress to be allowed to carry concealed weapons in the Capitol.

Separately, Capitol Police have also stationed their officers in regional airports, intended to protect lawmakers who have been bombarded, and at times threatened, as they arrive in and leave from Washington.

Lawmakers and their staff have been clamoring for more information from Capitol Police and other agencies about how to defend themselves and their offices — an extraordinarily complex task as all of the 535 congressional offices run themselves as separate entities.

Many are privately furious that they’ve received no detailed briefings from Wednesday’s attack.

“I received no in-depth briefings about what happened, why it happened and where it has gone from here,” Smith said ahead of the senators’ inauguration briefing. “Just as the American people haven’t received any briefing. That’s shocking to me, that we had an armed attack on the United States Capitol and there’s been no transparent discussion about what happened.”

Kyle Cheney and Heather Caygle contributed to this report.

Black Americans Are Getting Vaccinated at Lower Rates…