This Congress is the most diverse ever. But Hill staffers remain overwhelmingly white. 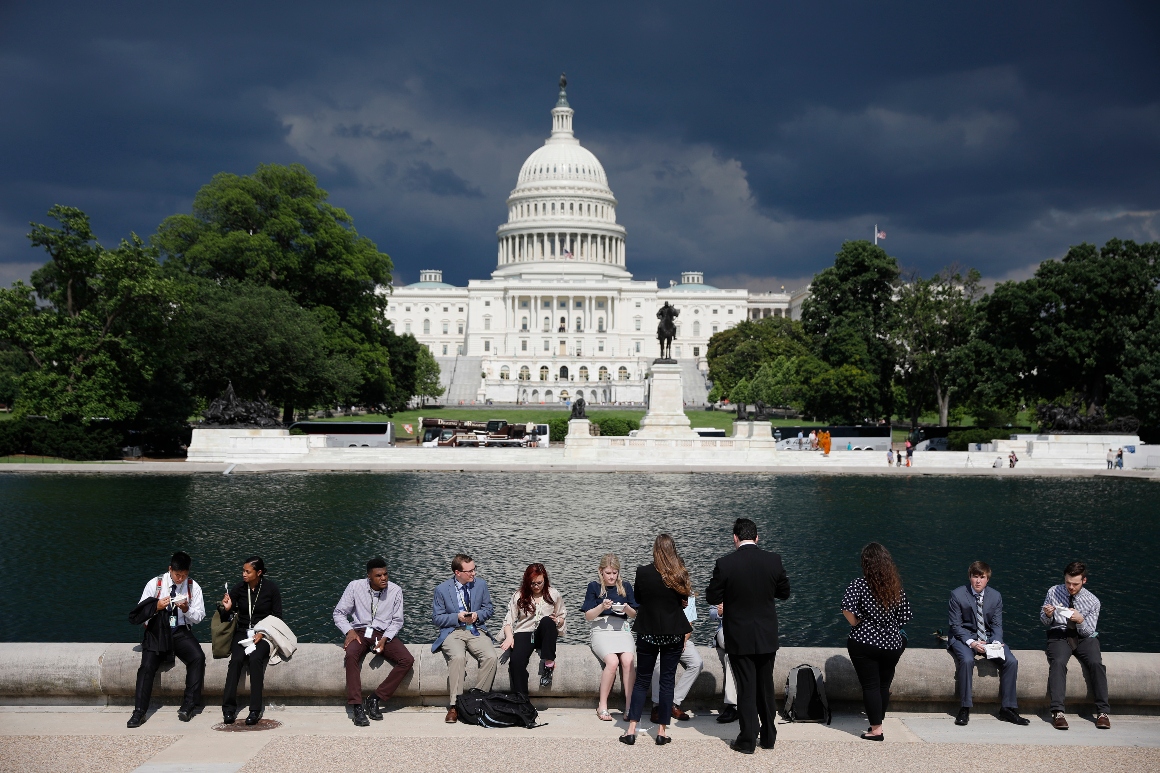 This Congress has a record number of women and people of color. But when it comes to the staff working behind the scenes, diversity is still a huge problem.

“Communities of color aren’t just pawns to mobilize on election day. They have real issues that need to be realized in policy,” said LaShonda Brenson, a senior fellow at the Joint Center for Political and Economic Studies and author of a 2020 report on the lack of diversity in the Senate.

The Joint Center found about 11 percent of Senate chiefs of staff, policy chiefs and communications directors are people of color, up from 3 percent in 2016. In the House, that figure rises to 19 percent compared to 14 percent in 2018, according to the Joint Center.

The lack of representation in Hill offices contrasts sharply with the demographics on the ground. In Delaware, Maryland and Virginia, three states where Black voters account for 25 percent of the electorate and were nearly 40 percent of the 2016 Democratic base, there are no Black Senate staffers in top positions, according to the Joint Center. Among the 10 states where Latino communities are one-third of the population, fewer than 14 percent of its top Senate staffers are Latino.

Members of Congress must hire “staff of color who can really speak to different constituencies that they may have, just so that their interests are represented,” Brenson said.

The disparity in representation exists in both chambers and parties, despite House leadership’s efforts to change the makeup of the Hill staff corps.

Democrats tend to hire more diverse staffers than Republicans (and are more frequently criticized for their failures to do so given their more multiracial base). But like their Republican colleagues, they have a hard time retaining and promoting staffers of color. White staffers are overrepresented in both Democratic and Republican offices while Black, Latino and Asian staffers are underrepresented compared to the racial makeup of their base. Among Republicans, those who represent regions in the South with large Black and Latino populations maintain almost all-white mid-level and senior staff.

Getting to that point is difficult. The obstacles to Congress for people of color are both structural and cultural. Joining a congressional staff often begins at the campaign level, where low pay, long hours and uncertain timelines create a tall barrier of entry for young Black and brown prospects, who often lack the safety net needed to thrive in those roles. The same is especially true in Washington, a city with a high cost of living where many entry-level Hill jobs are low-paying and one’s network is their greatest currency in securing any role, from intern to legislative director.

That precedent also hurts staff retention efforts. People of color who manage to work their way up within congressional offices often pivot to higher paying corporate jobs outside or relocate to the executive branch, creating a policy brain drain on both sides of the aisle. Recently, a handful of senior Black and Latino staffers were tapped to serve in the executive branch under President Joe Biden.

“There’s no way to truly break into that system, because you know no one with power or influence,” said Chuck Rocha, a Democratic strategist and former senior adviser to Bernie Sanders. “That’s still how most of these jobs on the Hill are granted — through somebody knowing somebody.”

‘You’re going to see a lot of Smiths’

Still, there are members with diverse office staffs, including at top levels. Senate Majority Leader Chuck Schumer announced in January the appointment of Sonceria Berry to secretary of the Senate, making her the first Black woman to hold the role. Speaker Nancy Pelosi has prioritized diversity in staff hiring and pushed her House colleagues to do the same.

The latest increase in diversity is due largely to freshman representatives for the 117th Congress who have hired staffers more demographically aligned with their districts. Reps. Cori Bush (D-Mo.) and Nikema Williams (D-Ga.), for example, filled all of their top staffing slots with people of color, a majority of whom are women. Sen. Alex Padilla’s (D-Calif.) top staffers are all people of color. Two-thirds of Raphael Warnock’s top staffers are Black.

Yet, for some aides, these changes are not enough. The more widespread lack of diversity in top roles, they say, diminishes the handful of gains in some offices, especially when the problem exists among lawmakers of color.

“We would expect them to hire or have chiefs that are Latino or Black or have legislative directors that are Latino or Black,” said one senior Senate aide of color who spoke on the condition of anonymity. “But if you go to the roster of congressional staffers, for the Democrats, and for members of color, you’re going to see a lot of Smiths, a lot of white people’s last names.”

And the impact on policy is palpable in the midst of the pandemic. Brenson cited the distribution of PPP loans as one example. Weeks after loans were disbursed, Black and Latino-owned businesses were among the last to receive funds. A larger share of minority-owned businesses have been forced to shut their doors as a result of the pandemic than white-owned companies.

Policy staff of color, Brenson argues, would have considered the needs of minority-owned businesses that are more likely to use community banks and credit unions rather than major banks. The second round of PPP loan applications, which opened in January, gave community banks access first.

“You go look at the staff of the Capitol, who were left to clean up after the mess of January 6, that’s a very diverse staff,” a former senior aide said. “But it’s diverse in that there’s people of color everywhere, who are on that team. That’s what the policy making teams of Capitol Hill need to look like.”

In interviews, staffers of color, who spoke on condition of anonymity, said their experiences are often frustrating and at times degrading. One Latino Senate staffer said bilingual colleagues of color, already underpaid compared to their white counterparts, usually are not compensated for translation assignments, which can be extensive in offices that represent multilingual districts.

This tracks with the Joint Center’s findings: While the presence of Black and Latino top staffers increased by eight percentage points in the Senate over the past five years, it decreased by one percentage point among Asian-American staffers, from 3.7 to 2.7 percent.

A memo to congressional leaders from Representative Democracy, which focuses on Hill diversity and funds the Joint Center’s research, outlined staffers’ concerns following the January 6 riots. Staffers of color, who are often “one of a few” in their offices, it said, felt particularly alienated by both the insurrectionists’ racist motives and Capitol police’s comparatively less hostile response to them than last summer’s Black Lives Matter protests.

It described the insurrection as “disturbing to many staffers, particularly those who had been dissuaded from bringing social justice issues related to the BLM movement for legislative debate on that same, sacred floor.”

Staff associations led by Black, Latino and Asian American staffers are trying to rectify the diversity deficit by advocating on behalf of their members. The Congressional Hispanic Staff Association, composed of more than 300 Latino House staffers, keeps a resume bank for its senior members to pull from when positions open in their offices.

“We are hoping to number one shed light on this diversity issue that we’re still having, and also expose them to this information — to this world — that is open to them if they position themselves,” said Herline Mathieu, president of the Congressional Black Associates.

‘We’re not making these asks alone’

Some congressional leaders are taking action as well. The Congressional Black, Hispanic and Asian American caucuses run programs annually that help pay and house young people of color while they work on the Hill. Their efforts are credited with increasing the number of staffers of color on the Hill.

And lawmakers of color historically have led the charge to diversify their staffs. Of the top Democrats in the House, Majority Whip Jim Clyburn (D-S.C.) boasts one of the most diverse staffs. People of color make up 64 percent of his top posts, including his chief of staff and policy and legislative directors. Other members have aimed to codify diversity efforts, like New York’s Grace Meng, a Democrat who added a Diversity Rule to the 117th Democratic Caucus rules to ensure that candidates of color are considered for every open position in a House office.

In addition, House and Senate leaders have put together programs and offices meant to recruit, train and promote nonwhite staffers. Among the most prominent is the House Office of Diversity and Inclusion, led by a Black director and a Latino deputy, which aims to hire and promote more people of color in House offices.

Its website has tabs for job postings, resume banks for Democratic and Republican offices, and an option to submit a resume for referrals to other roles. But currently, there are no jobs listed on the site. Representatives from the office declined to comment for this story.

‘Now we need you all to deliver’

Sanford Bishop (D-Ga.), a senior member whom several Hill veterans pointed to as an example of maintaining a diverse staff, said his approach to hiring is about effective policy making. He represents a majority-minority district and both his chief of staff and district director are Black. His middle and entry level staffers are equal parts white and nonwhite, according to a senior staffer.

“I surround myself with people from all points of view. I don’t want to be surrounded with people who want to rubber stamp my opinion, simply because I may happen to have my name on the door,” said Bishop, who is Black.

“I’d like to hear and I encourage contrary opinions in my office, and I think that having a diverse staff lends itself to that opportunity.”

Even though the 117th Congress is historically diverse, it is not without its problems. There are no Black woman senators, for instance. None occupy leadership roles on the House leadership team. But there are people of color in Democratic House leadership, with Clyburn as Majority Whip and Rep. Hakeem Jeffries (D-N.Y.) as head of the Democratic Caucus.

Quentin James, president of the Collective PAC, which supports Black candidates for public office, said he has talked to House and Senate leaders about their diversity efforts — and where they’re falling short. He applauded initiatives like the House Office of Diversity and Inclusion, but added that they needed to “kick it into high gear” to successfully recruit, train and promote people of color.

He’d like to see party officials address the issue from all angles, including campaigning, fundraising and media planning. It’s a big ask, he said. But now, after the 2020 election, he, like the growing number of advocates for diversity in politics, knows he has leverage.

“We’re not making these asks alone. We literally have the power of the Black vote to back us up,” he said. “We gave you all the majority, now we need you all to deliver. That is not only in policy, but also in positioning.”

Heather Caygle contributed to this report.