The pandemic surge in charts 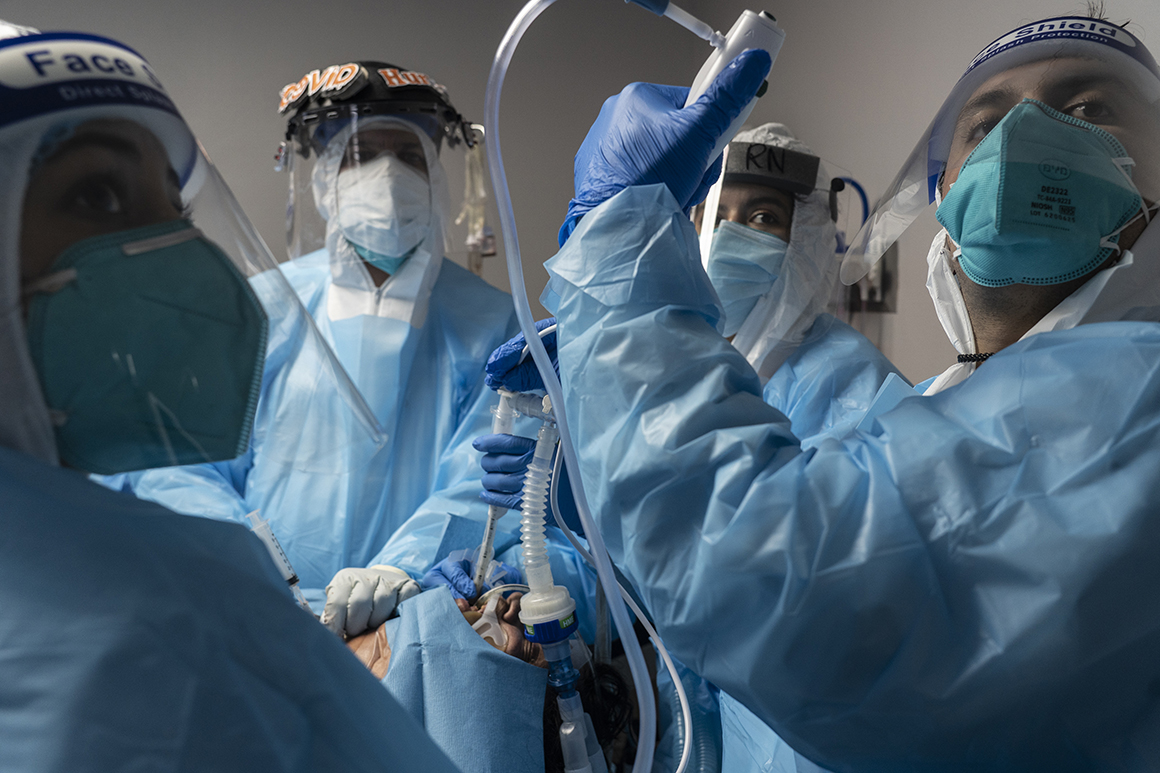 Over the objections of public health leaders, some of President Donald Trump’s advisers want him to focus on protecting very vulnerable people, like nursing home residents, but otherwise reopen the economy and schools and let the virus spread among the broader population and try to build immunity. Nursing homes cases, however, are already beginning to rise.

The nation failed to get control of the virus during the early months, putting the country on a collision course with seasonal factors that are now beginning to supercharge the winter wave. Cold weather means people gather indoors, where the virus spreads more easily than in the open air. Virologists believe lower indoor humidity also hobbles the human immune system’s defenses against the coronavirus, further fueling transmission.

Here’s what the data shows on cases, hospitalizations and deaths:

“The best opportunity we had to control this virus and get cases down was in the summer. But we didn’t take advantage of it,” Harvard epidemiologist Michael Mina said in an interview. “We are in for a long winter. I wouldn’t be surprised if we started to detect 200,000 cases a day a month from now.”

The pandemic is now being driven more and more by smaller family gatherings and social events. Epidemiologists say the impulse to reconnect with loved ones after months of isolation is understandable. But it can also fuel asymptomatic spread.

“What really worries me is Thanksgiving,” said Marta Wosińska, deputy director at the Duke-Margolis Center for Health Policy. “It’s indoors, people get together for an extended amount of time, and it’s more multigenerational than other gatherings that might happen.”

And the worse the outbreak gets, the harder it is to wrangle it with tools like contact tracing and targeted local restrictions. And the more those steps become ineffective, the more likely it becomes that political leaders face a stark choice between new lockdowns or another onslaught of deaths unprecedented in modern times.

“Think of the country as a forest, with a lot of dry leaves sitting on the ground,” explained Mina. “You can either have a few sparks starting fires, and you can hopefully contain those fires as they start. Or you can have tens or hundreds of thousands of sparks that all light simultaneously, and there’s very little avenue to contain it besides extraordinarily serious shutdowns.”

According to the Covid Tracking Project’s seven-day moving average, the U.S. entered November with more than 76,000 newly-diagnosed cases every day — which to use Mina’s metaphor means tens of thousands of sparks already igniting new fires in every part of the country.

New cases are a leading indicator for what happen in the weeks to come; diagnoses, hospitalization and deaths are tethered to caseload. The latest spike in cases can’t be explained away by more testing, as the administration’s testing czar Brett Giroir admitted last week, contradicting the president. With a lag of approximately two weeks, the rise in cases is now reflected in hospitalization numbers, despite more stringent criteria for hospital admission compared to earlier in the pandemic.

And the grimmest indicator of all, daily deaths, is ticking upwards again, often exceeding 1,000 per day. New drugs and advances in clinical treatment have significantly reduced the case fatality rate, but the virus remains significantly more deadly than seasonal diseases like the flu. And the sheer number of cases means more deaths will follow.

“I personally think that we’re going to exceed what we saw in the spring, in terms of daily deaths,” said Wosińska. “We’ll be basically hitting capacity in hospitals. We might see case fatality rates going up.”

Here’s what the data shows on national ICU capacity:

One justification for the six-week spring lockdown — which not all states followed — was to “flatten the curve,” so that cases didn’t simply overwhelm hospitals. The intensity of the coming winter wave could again bring parts of the country to that precipice. And if local health systems and hospitals are overwhelmed, it threatens not just the clinical progress against Covid-19 but patients with all sorts of other diseases and conditions.

Here’s a more granular view of the places seeing the largest surges:

And while topline national figures suggest there is still some slack in the number of beds available for sick patients, those beds are staffed by exhausted specialist doctors and nurses who have been spread thin and decimated by a virus that has sickened and killed thousands of their colleagues. Many facilities now rely on a surge workforce of nurses with less expertise and experience dealing with airborne infectious diseases.

“While you can add more beds, it’s very difficult to add more staff. That is going to be a major constraint because it’s going to be happening in too many parts of the country,” Wosińska noted.

Rising case numbers are also once again threatening to bring the virus into nursing homes and other long-term care facilities that have been linked to more than one-third of Covid-19 deaths since the beginning of the pandemic. While nursing home deaths have slowed, data from the American Health Care Association and National Center for Assisted Living, an industry group, shows cases rising once again. In nursing homes, 7,563 new cases were reported in the third week of October alone.

Here’s one look at where nursing homes are struggling most:

According to HHS data, 1 in 4 nursing homes reported personal protective equipment shortages at the beginning of October, leaving them with less than one week’s PPE supply. And 29 percent reported staff shortages of nurses and aides who care for residents.

In the current hardest-hit states, even hospitals, generally first in line for Covid-19 supplies, are experiencing alarming shortages. According to a White House report obtained by the Center for Public Integrity, more than 20 percent of North Dakota’s hospitals had less than a week’s supply of N95 masks on hand in mid-October, with some reporting a less than three-day supply.

Federal and state governments rely on proactive and widespread testing to know where the virus will surge next so they can allocate resources. But states are now having trouble keeping up with testing. That potentially leaves the public health response flying blind.

The World Health Organization recommends keeping broad restrictions in place until the test positivity rate — the share of all Covid-19 tests conducted that come back positive — is below 5 percent, to ensure that public health authorities can track the virus with some degree of precision.

Here’s the current state of test positivity around the country:

In the United States as a whole, the rate is 6.6 percent and rising, and in many states it’s far worse. In South Dakota, the test positivity rate is approximately 50 percent, in Wyoming, it’s 42 percent, and in Iowa it’s 36. In Wisconsin, one of the pivotal swing states in Tuesday’s election, the positivity rate is 14 percent.

It’s hard to compare states because some include antibody tests that confirm past exposures, while others only report tests that identify current infections.

With testing lagging again, it’s especially difficult to forecast the pandemic’s near-term trajectory, let alone when and how high it will peak nationally.

More conservative forecasts, such as the model compiled by researchers at Johns Hopkins, predict that new deaths will continue appearing at roughly the same rate, another 25,000 deaths over the next month. The U.S. Army’s more pessimistic model predicts another 67,000 deaths, bringing the U.S. cumulative total above 300,000 by the beginning of December.

Every credible forecast, however, agrees that cases and deaths are continuing to rise and that the country is not “rounding the final turn” as Trump has been promising on the campaign trail. Until a vaccine becomes available — and even when that happens it will take months to distribute it widely — experts say the virus has no reason to disappear in the near-term.

Portable Sensors for Detecting COVID-19 and Other Viruses