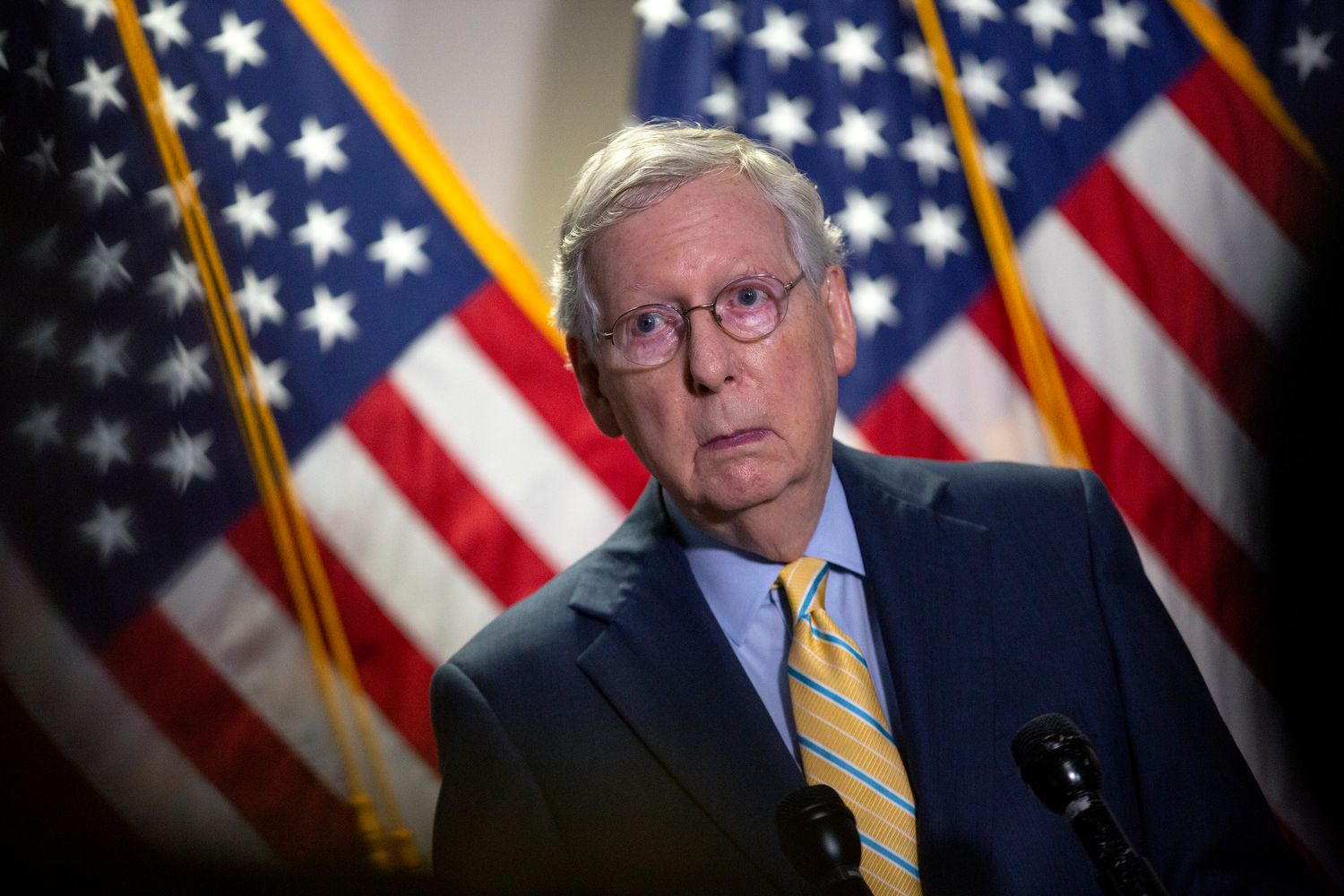 Yeah, Operation Warp Speed hasa cool name. But what exactly is it? Go inside the federal government’s $10 billion dollar effort to fast-track a coronavirus vaccine that might never come.

Even when Senate Republicans finally get some good news, such as preparing to pass the annual defense authorization bill as they prepare to leave town for the July 4 holiday, Trump threatened to veto the legislation because he’s upset it would allow the renaming of military bases that honor Confederate generals. McConnell and GOP leaders had already backed the proposal, but Trump — focusing on his own reelection strategy first­— wants nothing to do with it.

“I’m still very confident we can win a lot of these races this fall,” Thune added. “But timing and circumstances and the political environment have a lot to do with that. We’ll see what it looks like then.”

“With all due respect, it seems like the Democrats and the mainstream media are determined to do everything they can to defeat the president, and occasionally he undermines himself by some of the things he does and says,” said GOP Sen. John Cornyn, who is up for reelection in a suddenly competitive Texas.

“So it’s been a rocky couple of weeks, but that means we got nowhere to go but up.”

To be fair, Trump isn’t the cause of all Senate Republicans’ problems, although the president is always the center of attention. All roads lead to Trump, and he hovers over every Senate race.

Sen. Susan Collins’ (R-Maine) vote for Brett Kavanaugh’s Supreme Court nomination in Oct. 2018 was a hugely controversial action, as Collins, one of the most vulnerable Republicans facing reelection, was well aware at the time. She also voted to acquit Trump during his impeachment trial earlier this year, another move that infuriated Democrats. Her reelection was always going to be tough, and Sara Gideon — speaker of the Maine House of Representatives — is a formidable opponent.

Sen. Cory Gardner (R-Colo.) has been a loyal vote for Trump and Senate GOP leadership throughout his term, ensuring that he will face one of the toughest races this election cycle. Former Colorado Gov. John Hickenlooper (D), after initially saying he “wasn’t cut out to be a senator” and briefly ran for president, decided to jump into the Senate race after all. Hickenlooper handily won his primary on Tuesday night, setting up a high-profile contest this fall in a key race.

And Sen. Martha McSally (R-Ariz.) has aligned herself closely with Trump in her race against Democrat Mark Kelly, husband of former Rep. Gabby Giffords. As Trump has slid in Arizona, so has McSally, who also lost a Senate race in 2018. In recent weeks, McSally has been trying to argue that her vote to repeal the Affordable Care Act doesn’t mean that she would allow health insurers to reject coverage for patients with pre-existing conditions, despite the fact that a GOP lawsuit to overturn Obamacare would do just that. McSally is trailing Kelly badly in all the recent polls.

“I feel good in the sense that we are on the offense, we’ve got a strong map,” said Sen. Catherine Cortez Masto of Nevada, chairwoman of the Democratic Senatorial Campaign Committee. “But it really starts with our candidates and our incumbents. They’re strong … they’re outraising their Senate Republican opponent. That tells you a lot. That tells you that they’re working hard in their states.”

Other GOP wounds have been self-inflicted. Sen. Kelly Loeffler (R-Ga.) got caught up in — and was later cleared — over allegations of insider trading relating to stock transactions she and her husband made as the Covid-19 disaster got worse. Loeffler faces a challenge from GOP Rep. Doug Collins and other candidates on Election Day. If no one wins a majority at that time — which seems likely — there will be a runoff between the top two candidates in January. This seat is likely to stay in GOP hands.

McConnell, who is facing Democrat Amy McGrath in what will be a very expensive race, downplayed the spate of negative news for Republicans.

McConnell added: “I don’t think the landscape is any different from what it would’ve been a year ago.”

But when asked about Trump causing problems from Senate Republicans, McConnell didn’t answer.

As for the GOP incumbents themselves, they continue to express optimism about their own races and the overall state of the Republican majority.

“I feel good about our race,” said North Carolina Republican Thom Tillis of his own tight battle against Democrat Cal Cunningham, a former state senator who is leading slightly in the most recent polls. Cunningham ran unsuccessfully for the Senate in 2010. “I think we’ve got a good base of support in North Carolina. North Carolina is always a so-called ‘firewall state.’ Probably 88, 90 percent of the people have made up their mind, and what we got to do is just communicate the truth, we win.”

As for Blunt, he waved away any comparison to the GOP wipeout in 2006, when Democrats seized majorities in the House and Senate.

“I thought one of the key problems in 2006 was there was both some denying some of the problems we had and an unwillingness to share the information behind the problem we were facing,” Blunt said. “And I don’t sense that right now.”