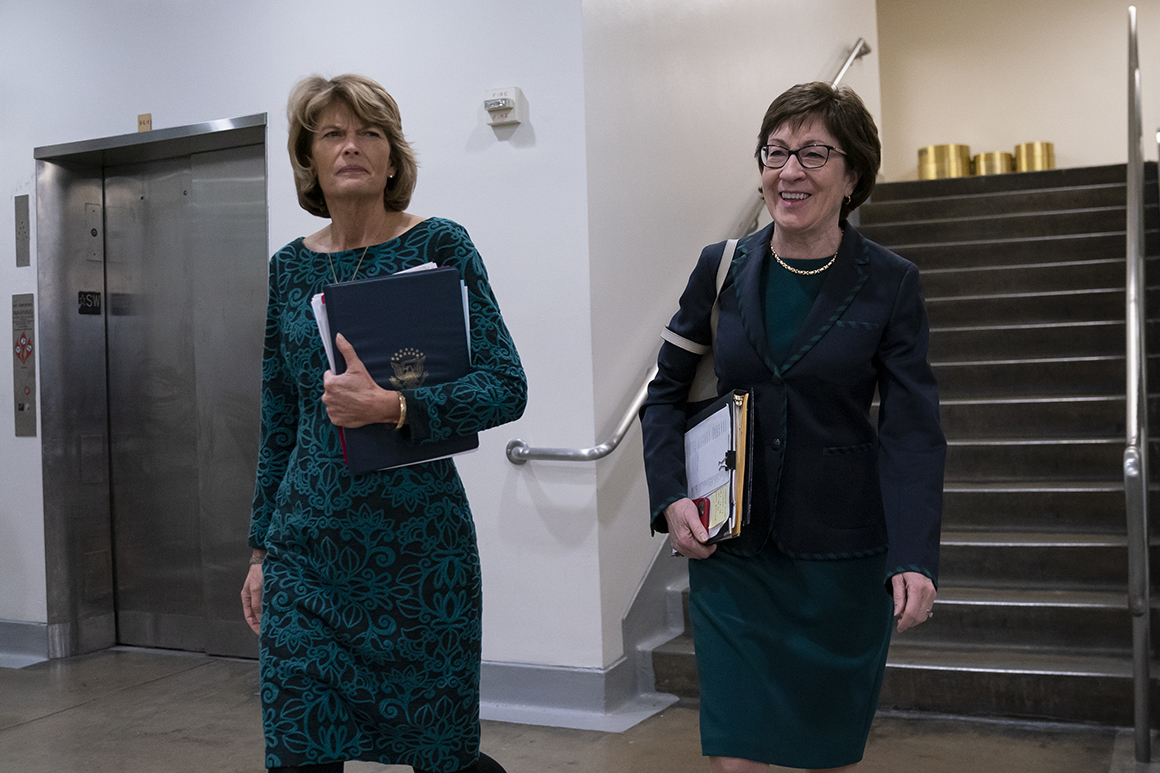 “He’s our president-elect. All presidents have a right to their Cabinet,” Murkowski said. “Our job, our role is to make sure that he selects folks that are … within the mainstream. And are good, qualified credible candidates. And if he does that, sure, I am going to work with him.”

Of course, Biden would have far greater flexibility to appoint progressive nominees if Democrats can win the Georgia races on Jan. 5 and control the Senate 50-50 after Kamala Harris is sworn in as vice president. But short of that, avoiding a scorched-earth battle over nominations to start his presidency will be consolation for Biden.

Biden indicated the haggling will begin in days, telling reporters Thursday he will announce his Treasury secretary around Thanksgiving. He said it is a nominee who “will be accepted by all elements of the Democratic Party, from the progressive to the moderate coalitions.” He left out whether Republicans might find it acceptable.

The possibility of split control between the White House and Senate lacks much recent precedent. The last president to be ushered in alongside a Senate of the opposite party was George H.W. Bush, who followed a fellow Republican president and kept some of his predecessor’s Cabinet. The chamber was far less polarized then, but the Senate still rejected John Tower, Bush’s nominee for Defense secretary, showing how perilous the lack of Senate control can be for a new president.

As for Biden, pretty much everyone in the Senate acknowledges Sens. Elizabeth Warren (D-Mass.) or Bernie Sanders (I-Vt.) won’t be confirmed by a GOP Senate. But it’s certainly possible to envision someone like Sen. Chris Coons (D-Del.) or Doug Jones (D-Ala.) winning confirmation to roles like secretary of State or attorney general.

Biden could also skirt the Senate and name his Cabinet nominees in an acting capacity, as Trump did repeatedly during his presidency. It also wouldn’t be a shock to see some nominees go down: Most administrations miss with at least one high-profile pick.

Sen. Chris Murphy (D-Conn.), who has warned a Republican-led Senate could mean an early constitutional crisis for Biden, said his fears have been eased somewhat.

“I’m less worried. I’ve had good conversations with my Republican colleagues about what the process might look like. I’m hopeful,” Murphy said. “I feel like there’s a critical mass there that believes in making sure the president gets a Cabinet. I feel like we might be able to work through this.”

Ultimately, the question of whether to give Biden’s nominees a floor vote is up to Senate Majority Leader Mitch McConnell (R-Ky.), who has enjoyed a solid working relationship with the former vice president in the past. Since the election, however, he has not spoken to Biden, nor has he deemed Biden the president-elect.

McConnell proved to be a one-man blockade for some of President Barack Obama’s appointments. He delayed the confirmation of Attorney General Loretta Lynch during a dispute over a human trafficking bill and simply ignored Merrick Garland’s Supreme Court nomination and other judicial picks. But Romney said he presumes the GOP leader would put Biden’s Cabinet picks up for votes. McConnell declined to comment for this story.

Biden isn’t expressing any concern at the moment.

“President-elect Biden looks forward to working in good faith with both parties in Congress to install qualified, experienced leaders by Day One who are capable of saving lives from the pandemic, responding to urgent threats to our national security, and getting our economy back on track,” said Andrew Bates, a spokesman for Biden.

And it might be in the GOP’s best interest not to derail Biden’s Cabinet picks in the first days of his presidency. Republicans will have more than a half-dozen competitive Senate seats in play in 2022 and at best a very narrow majority next year.

“It depends who they nominate. I always worked with the Obama administration. I supported Loretta Lynch. Ask my Republican colleagues,” said Sen. Rob Portman (R-Ohio), who is up for reelection. “We want to make sure they’re good people. But we’ll give them a fair shake.”

“It will just require negotiation,” said Sen. John Cornyn (R-Texas), a top McConnell ally. “If they want the Cabinet confirmed, they would be well advised to not nominate radical progressives and people that would have difficulty.”

Whether things move quickly is another story. It takes only one senator to demand roll call votes, which would delay confirmation of at least some nominees past Inauguration Day.

Trump faced heavy opposition to many of his picks, and saw only his Defense and Homeland Security secretaries confirmed on Day One. Even if Biden eventually sees his Cabinet installed, it could take awhile.

Tracking the appointments, the people, and the power centers of the next administration.

The battles over nominations infuriate both parties. Republicans still smart that filling Trump’s Cabinet was such a slog, though some of his nominees were plainly flawed and the administration did not submit paperwork quickly for others. Democrats fume over how Obama’s nominees were treated and how the GOP is ramming through judge after judge under Trump.

Biden has campaigned as someone who can restore a sense of normalcy to both the country and the Senate. Some Democrats share Murphy’s view that it’s possible; others are more pessimistic.

“Hopefully they’ll do it. I would expect they would. If they don’t, I guess it’s a whole different level of obstruction,” said Sen. Jon Tester (D-Mont.). “I think most people on the other side of the aisle are good people who don’t do things for political reasons.”

“I’m tempted to say they have to respect the conditions and the norms. But they haven’t respected them up until now. So I’m concerned,” added Sen. Richard Blumenthal (D-Conn.). “Mitch McConnell’s goal in the first term was to make Obama a one-term president. He failed to do it. The same kind of obstructionist motives may be in play now.”

Tester voted for some of Trump’s Cabinet nominees, while Blumenthal opposed most of them. And since the Senate changed its rules to eliminate the 60-vote threshold on most nominees in 2013, only a simple majority is required to confirm them.

But if America ends up with a GOP Senate and a Democratic White House next year, party line votes aren’t going to cut it for Biden. Instead, the two parties will have to work together to staff Biden’s government, despite all the bitterness between them.

“If he does win, then he will have the right, I think, to a Cabinet,” said Sen. Lindsey Graham (R-S.C.), who still won’t acknowledge Biden won the election. “I don’t mind voting for people I wouldn’t pick or have a different view than I do. I’m just not going to vote for a socialist.”

Marianne LeVine contributed to this report.