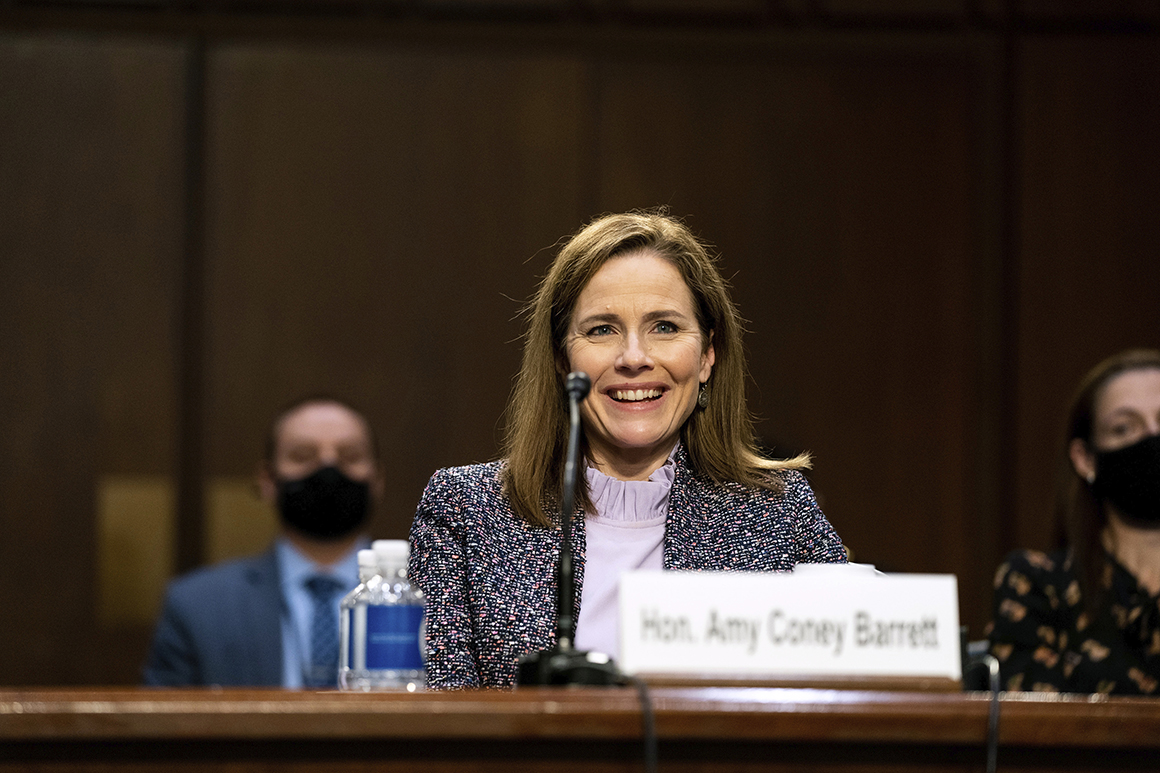 The new survey represents an increase in support for Barrett’s confirmation compared with a survey immediately after her initial nomination last month, when 37 percent of voters said the Senate should vote to confirm her.

But at the same time, Trump’s approval rating remains dangerously low for a president about to face the voters. Just 43 percent approve of the job he is doing as president, down slightly from 45 percent last week. A majority of voters, 55 percent, disapprove of Trump’s job performance.

And despite support for Barrett’s confirmation, voters say they actually trust Joe Biden, the Democratic presidential nominee, to handle the high court over Trump, 46 percent to 39 percent.

“A slim majority of voters now back Senate confirmation of Judge Amy Coney Barrett to replace the late Justice Ruth Bader Ginsburg on the Supreme Court — a level of support that has increased by double digits since President Trump nominated her last month,” said Kyle Dropp, co-founder and president of Morning Consult. “Voters are also aware of the impact her confirmation could have on the court, as 54 percent believe her confirmation will make the Supreme Court at least somewhat more conservative.”

Taken together, the polls point to a Supreme Court nomination proceeding largely without the controversy of Trump’s two prior nominees: Neil Gorsuch, for whom Senate Republicans abolished the filibuster for high court picks, and Brett Kavanaugh, who was accused of sexual assault while he was in high school in suburban Maryland.

But other surveys — the POLITICO/Morning Consult poll does not include a presidential horserace question — don’t show a presidential contest that has been significantly reordered by a confirmation battle. Biden leads Trump by 10 points in national polling averages from The New York Times and FiveThirtyEight, and 9 points in the RealClearPolitics average.

Other public surveys show voters are more divided on Barrett’s nomination — a likely artifact of question-wording differences. A New York Times/Siena College poll out on Tuesday found voters split almost evenly, but it asked them whether they supported (44 percent) or opposed (42 percent) Barrett’s nomination — not how the Senate should vote.

A Gallup poll also released on Tuesday worded its question similarly to the POLITICO/Morning Consult poll, but it found that slightly more Americans said the Senate should vote in favor of Barrett’s nomination (51 percent) than said it should not vote in favor (46 percent). But that survey was conducted over a more-than-two-week time period, from right after her nomination and concluding on the final day of the Senate Judiciary Committee hearings last week.

Two results consistent throughout the surveys: More voters think the Senate can proceed before the Nov. 3 election than think should wait until after, and voters generally oppose adding seats to the Supreme Court, as some Democrats have suggested doing. In the POLITICO/Morning Consult poll, 45 percent say the Senate should vote as soon as possible, while 34 percent say they should vote on Barrett’s confirmation only if Trump wins reelection. Similarly, in the New York Times/Siena poll, a 47 percent plurality say the Senate should vote before the election.

In the POLITICO/Morning Consult poll, just 24 percent of voters say Congress should pass a law increasing the number of justices. In the New York Times/Siena poll, only 31 percent said Democrats — the survey’s wording introduced explicit partisanship to the question — should expand the size of the court.

The POLITICO/Morning Consult poll was conducted Oct. 16-18, surveying 1,994 registered voters online. The margin of sampling error is plus or minus 2 percentage points.

Morning Consult is a global data intelligence company, delivering insights on what people think in real time by surveying tens of thousands across the globe every single day.

More details on the poll and its methodology can be found in these two documents: Toplines | Crosstabs

Donald Trump has a ‘cold’ negotiating tactic that has worked for 45 years, says ex-adviser | World | News