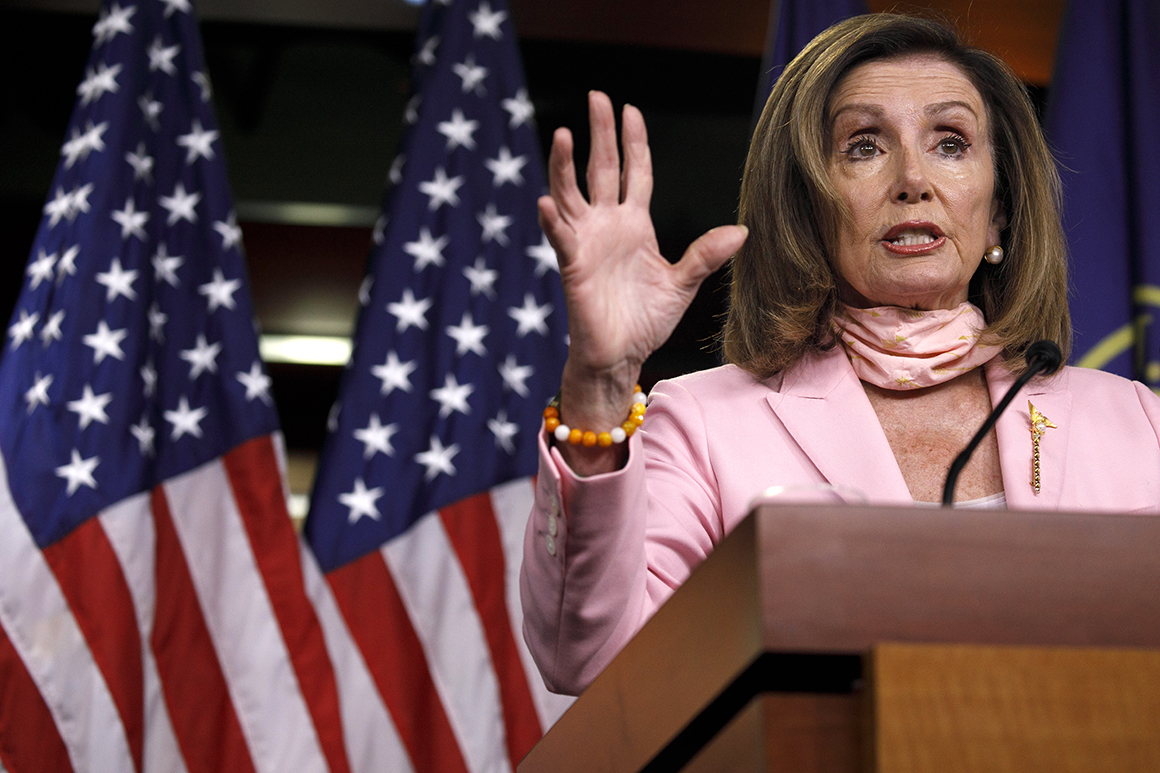 Speaker Nancy Pelosi on Thursday rejected the Trump administration’s calls to limit the next coronavirus relief package to $1 trillion, arguing that Congress will need to approve at least double that amount amid a surge in cases.

"A trillion dollars is ok, that’s an interesting starting point. But that doesn’t come anywhere near," Pelosi said at her press conference.

Congressional leaders, including Pelosi, are in the early stages of drafting a fifth mammoth aid bill to stave off a total collapse of the U.S. economy while infusing cash in health efforts to control the coronavirus pandemic. But Democratic and Republican leaders remain fiercely at odds over the size and scope of the package, raising questions about Washington’s ability to get it done in the next three weeks.

Pelosi said that Congress needed to approve that package and send it to President Donald Trump’s desk by the end of this month, when lawmakers are slated to depart for their August recess. It’s the same timeline laid out by the White House and GOP lawmakers, though that is about the end of any agreement.

Those divisions became clearer this week, when a top aide to Vice President Mike Pence said the White House wants Congress to cap the size of that bill to $1 trillion.

“There’s obviously been a lot of stimulus put in the system over the last couple bills, and so the price tag for us would be that,” Marc Short, the vice president’s chief of staff, told Bloomberg Radio.

But a $1 trillion-or-less package is a nonstarter for House Democrats who passed their own $3 trillion package in mid-May. The GOP-led Senate had ignored that package for weeks.

The Democrats’ package — which was approved before the latest surge in cases across the South — would bolster U.S. testing and treatment efforts, shore up cash-strapped state and local governments and deliver relief checks to millions of Americans.

Republicans have signaled they support some of the Democrats’ proposed relief efforts, including another round of direct payments to millions of Americans. Senate Majority Leader Mitch McConnell (R-Ky.) said in Louisville, Kentucky this week that he would support relief checks going to Americans earning $40,000 a year or less — a threshold that Pelosi said “would have to be explained and justified.”

The earlier round of relief checks included full payments to Americans who made less than $75,000, and partial payments to those making more.

"We do support another round of economic impact payments,” Treasury Secretary Steven Mnuchin added on CNBC on Thursday. “The level and the criteria we’ll be discussing with the Senate.”

“As soon as the Senate gets back, we’re going to sit down on a bipartisan basis with the Republicans and the Democrats and it will be our priority to make sure between the 20th and the end of the month that we pass the next legislation,” Mnuchin said.

Max Cohen contributed to this story.

How To Wear A Denim Jacket In 10 Modern Ways