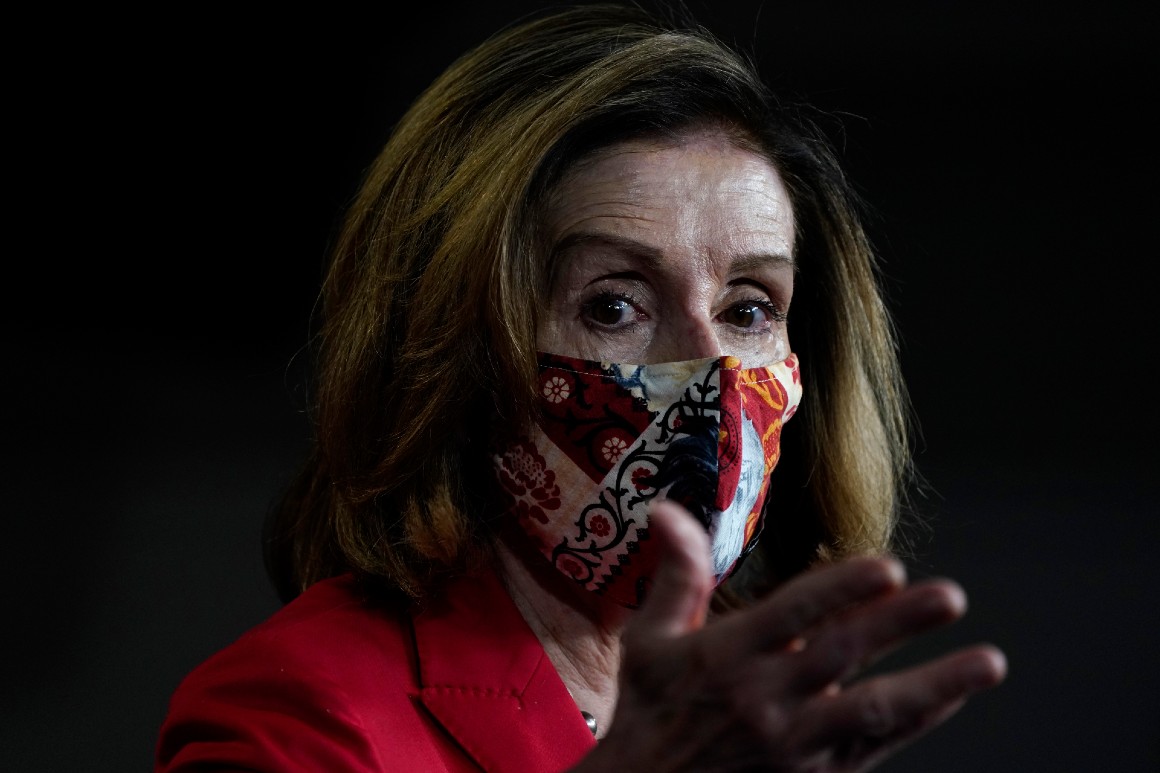 Instead, most lawmakers will be sworn in without the company of a single guest in order to reduce coronavirus exposure, and have been told to remain in their offices except during votes. The Capitol physician has strongly warned against “gatherings of any kind.”

Even Pelosi’s election — for what could be her final turn with the gavel — will lack the usual theatrics of a vote to confirm the next speaker. The vote itself is expected to take between three to four hours as lawmakers shuffle through the chamber in small groups to minimize their risks to the virus.

“As we are all sworn in today, we accept a responsibility as daunting and as demanding as any that previous generations of leadership have faced,” Pelosi wrote in a letter to her members ahead of the swearing-in ceremony Sunday.

Pelosi will face her tightest margins yet, after Republicans flipped more than a dozen seats in November. The biggest threat to her gavel, though, will come from possible Democratic absences, as lawmakers are not able to vote by proxy for speaker.

Pelosi told her caucus on a private call last week that her “opponent is Covid.” But the math did not appear to be as much of concern Sunday morning, with Democrats only anticipating one absence on their side — Rep. Alcee Hastings, who is battling pancreatic cancer. Republicans were anticipating two absences — Reps.-elect David Valadao and Maria Elvira Salazar, who both recently tested positive for coronavirus. Another seat will remain open: New York’s 22nd district, where the race has not yet been called between Democratic Rep. Anthony Brindisi and GOP contender Claudia Tenney.

“I am confident that the Speaker’s election today will show a united Democratic Caucus ready to meet the challenges ahead, and that we are prepared to set our country on a new course,” Pelosi wrote in the note to her members.

The vote will, once again, seal Pelosi in the record books, as the first woman to hold the position and the first person in six decades to regain the speaker’s gavel — now twice — after losing it.

Control of the Senate, meanwhile, remains uncertain, with two Georgia runoff races set for Tuesday that will determine whether Mitch McConnell or Chuck Schumer will be majority leader.

Sunday’s proceedings will kick off a packed week in Congress that will include a chaotic but doomed effort by Republicans to dethrone Joe Biden as president-elect.

Multiple GOP members, led by Alabama Rep. Mo Brooks in the House and Sen. Ted Cruz in the Senate, have vowed to challenge those results in Trump’s last gasp at overturning Biden’s victory. Sen. Josh Hawley (R-Mo.) was the first senator to join the House GOP’s effort to contest the election. Trump and his supporters have claimed — without evidence — that Biden only won because of “voter fraud,” but the legal challenges from Trump and his allies have largely failed.

That gambit will take place Wednesday, Jan. 6, when the House and Senate meet for a joint session to formally count the votes of the Electoral College. Vice President Mike Pence will be put in the awkward position of leading the joint session. That process, which might take as little as a half hour, is now expected to drag on late into the night Wednesday or possibly the wee hours of Thursday, especially after almost a dozen GOP senators signed on to the effort on Saturday.

Each of the opening week processes — from the first quorum call to the Electoral College vote — will pose a logistical nightmare for Capitol officials charged with keeping members safe during the still-raging coronavirus outbreak.

Unlike for much of 2020, when many House lawmakers were able to vote by proxy and limit their travel to D.C., the start of the 117th Congress will require ever member to vote in-person until the new rules package is adopted.

That means hundreds of members will travel to Washington after spending time with family over the holidays — likely without quarantining first in D.C.

The freshman class will be sworn in as a group on the floor, preserving at least some part of the House’s bi-annual tradition. But in a stark change from previous sessions, each newly elected member will be allowed only one guest in the House gallery on Sunday. (Returning members are not permitted guests.)

Congressional leaders have stepped up the coronavirus response in the Capitol in recent weeks, including an in-house testing site that delivers results within 24 hours. Still, many lawmakers and aides worry deeply about coronavirus spreading across the sprawling Capitol complex.

More than 50 members and members-elect have tested positive in recent months, including several who have been hospitalized. Last Tuesday, lawmakers mourned the death of their soon-to-be colleague, GOP Rep.-elect Luke Letlow of Louisiana, who died of Covid-19 at age 41 and was just days away from his swearing in.

In all, the 117th Congress will include more than 60 incoming House members, including the 14 Republicans who flipped seats and helped chip away at the Democrats’ now-fragile majority.

The GOP’s freshmen class includes a record number of women — a much-needed boost after the conference had just 13 female members last term — as well as a mix of racial and ethnic backgrounds. Several freshmen are actually returning members: Rep. Darrell Issa (R-Calif.) and Pete Sessions (R-Texas), as well as Valadao.

One GOP freshman, Rep.-elect Mariannette Miller-Meeks, will be seated “provisionally” after she was certified the winner of a race by a margin of only six votes. Her Democratic challenger, Rita Hart, has filed a challenge with the House seeking closer scrutiny of the race, specifically, the roughly two dozen ballots that she claims were improperly excluded from the count.

CORRECTION: Mariannette Miller-Meeks’ name was incorrect in an earlier version of this article.

Jayapal: ‘There’s no trust’ among House…