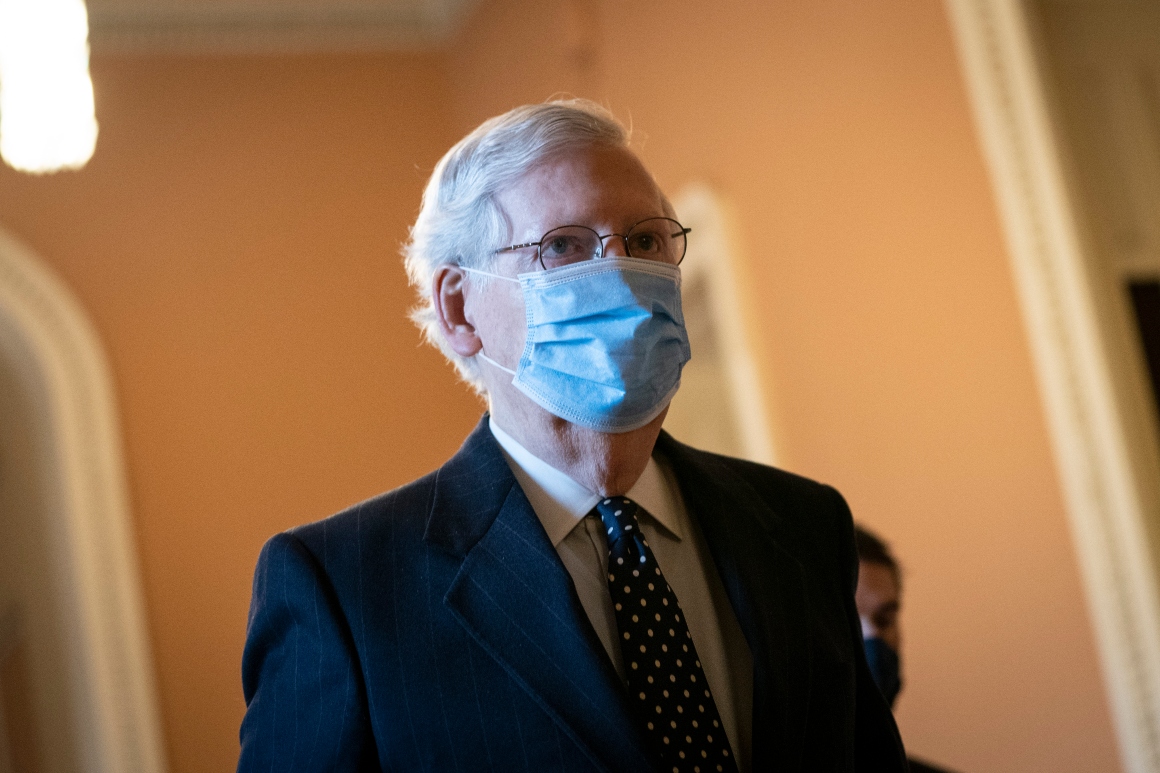 “My goal is, in every way possible, to have nominees representing the Republican Party who can win in November,” McConnell said by telephone. “Some of them may be people the former president likes. Some of them may not be. The only thing I care about is electability.”

The Kentuckian made clear that “I’m not predicting the president would support people who couldn’t win. But I do think electability — not who supports who — is the critical point.”

The Senate GOP has largely followed McConnell’s guidance over the past five years as Trump’s hold over the party grew more intense. McConnell didn’t comment on the tweets, and so, neither did most of his Republicans.

His job has become even trickier in a unique 50-vote minority. Yet trying to guide Republicans after a presidential loss is not new for McConnell: After former President Barack Obama’s victories, McConnell shaped Republicans into an occasionally brutal, often effective opposition force to Obama’s agenda.

Now the 78-year-old has a similar veto power over some of President Joe Biden’s legislative platform. His willingness to dive into tough primary fights, trying to root out the type of candidates that plagued the GOP in 2010 and 2012, is a potent weapon in his shadow battle against Trump. But there’s no guarantee he can win it.

“To the degree that there’s a titular leader for the party,” it’s McConnell, said GOP whip Sen. John Thune (R-S.D.). Trump has threatened Thune with a primary challenge, making the South Dakotan one of several in McConnell’s conference who could face Trump-inspired challenges in deep-red states.

But though McConnell excoriated Trump on Saturday for a “disgraceful dereliction of duty” during the Jan. 6 insurrection, afterward he quickly reverted to type and avoided the former president’s controversies. During the interview, McConnell declined to address Democratic criticisms that his acquittal/condemnation move was an attempt to have it both ways when it comes to Trump.

And he did not elaborate on Saturday comments that appeared to hint Trump may face criminal prosecution.

“I’ve said all I need to say about that,” was where McConnell left it.

McConnell also declined to say if, should Trump seek the White House in 2024, he would stand in opposition: “I’m focused on ‘22.”

Comments like that are intended as guideposts for his members, who are already beginning to trash Biden’s agenda as “far left.” It’s a strategy that allows Republicans to mostly ignore Trump for a few months, at least.

“We’ll focus on what the Biden agenda looks like,” said Sen. John Cornyn (R-Texas), a top McConnell deputy. “That will create some cohesion among the loyal opposition.”

But not everyone listens to the party leader. Just look at Sen. Josh Hawley (R-Mo.), who challenged the November election results despite McConnell’s warnings not to force the issue. Or even Sen. Lindsey Graham (R-S.C.), who plans to meet with Trump soon to discuss the future of the party.

Then there’s about a half-dozen senators who look to be mulling presidential runs, many under the Trump mantle.

“I don’t know what happens to the party as a whole in terms of the folks deeply committed to President Trump,” said Sen. Shelley Moore Capito (R-W.Va.), who is close to McConnell. “But I hope they stick with us.”

McConnell’s acquittal vote isn’t mollifying Trump supporters who are growing weary of his rhetorical flourishes about the former president.

“A lot of people are frustrated with his comments. I’m not going to sugarcoat it,” said Rep. Andy Biggs (R-Ariz.), the head of the hard-line House Freedom Caucus.

Some House Republicans argued that McConnell is on equal footing with their leader Rep. Kevin McCarthy, even though the minority party is essentially irrelevant in the House. McCarthy “leads a lot more of us” than McConnell, as Rep. Jim Banks (R-Ind.) put it.

Banks chairs the conservative Republican Study Committee, which has already huddled with potential presidential hopefuls such as Mike Pompeo. And Banks argued that with multiple voices competing to claim the party’s mantle ahead of 2024, the GOP has no single leader right now.

“At this moment, we have many leaders,” Banks said. “The vacuum has been filled by many voices.”

“Frankly, our party will largely be guided by how we respond to what the Democrats are going to do,” said Sen. Roy Blunt (R-Mo.), a member of GOP leadership. “One person doesn’t necessarily lead that when you don’t have the White House.”

Some on the right say Trump’s influence in the GOP isn’t fading just because he is out of office, thanks to his draw on the campaign trail and ability to grab headlines.

“The fact he is no longer in the White House does not mean he is not the leader of the movement he started four or five years ago,” Biggs said.

McConnell and Biggs could very well find themselves on the opposite ends of the spectrum next year in Senate races like the one in Arizona, where a GOP chaired by Ward is struggling to win tough races in what was once a red state. Plus, McConnell said the Senate GOP will stand strongly behind all of its incumbents, including Alaska Sen. Lisa Murkowski, the lone Republican voting to convict Trump who faces reelection in 2022.

When asked who is running the party right now, Murkowski answered: “As much as one can be, Sen. McConnell.” McConnell just won reelection, giving him six years to plot a course for the Senate GOP.

Unlike the Senate, many House members are elected in noncompetitive, gerrymandered districts. That’s produced a decidedly pro-Trump GOP conference over the years, with more than 120 House Republicans voting to challenge the election results even after last month’s deadly riots.

Still, 10 House Republicans — including GOP Conference Chairwoman Liz Cheney (R-Wyo.) — voted to impeach Trump. Pro-Trump Rep. Matt Gaetz (R-Fla.) even campaigned against Cheney last month in Wyoming, where he couldn’t resist taunting McConnell as a member of the “establishment” who is trying to “screw our fellow Americans for generations.”

McConnell has defended Cheney and on Saturday even indicated he may even get involved in her re-election campaign.

“The future of the party will be determined in places like Wyoming in ‘22,” McConnell said.

Trump leaves the GOP at a crossroads: It’s hard to imagine the party’s next two years will be pretty given its divisions over Trump’s impeachment, his agenda and how to deal with his extra-legal challenges to the election. Soon after Trump’s acquittal, state parties began hammering Senate Republicans who voted to convict.

But becoming majority leader is a numbers game, and McConnell has a solid start with 50 seats. From that perspective, 2022 doesn’t look so bad to him. Even with all that Trump has put the party through, as far as raw power in Congress goes, McConnell has seen worse.