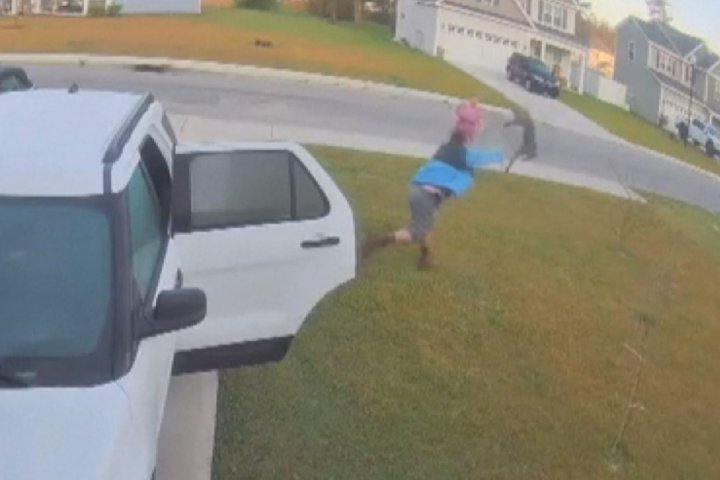 Don’t mess with Happy Wade or his wife.

The North Carolina man is being hailed for his steely nerves after he pulled a rabid bobcat off his wife and hurled it across the lawn outside his home in a dramatic encounter captured on surveillance video.

Happy and Kristi Wade were about to take their own cat to the vet in Burgaw, N.C., on April 9 when the bobcat attacked, local station WECT reports.

Footage from the couple’s suburban home shows the attack playing out in the driveway as Kristi is about to load her cat into a van. She had her cat in a carrier on the passenger’s side of the vehicle at the time, while her husband Happy was bringing coffee and a tray of brownies over to the driver’s side.

Kristi says she heard a “very angry cat” growl and turned to see the bobcat emerge from under another car.

“The face of this bobcat came around the corner,” she told WECT.

“I won’t soon forget the look in that cat’s eyes,” she said in a separate interview with the New York Times. “It had its sights set on me, and that’s when I ran.”

Video shows the bobcat pouncing on Kristi from behind as she tries to flee. The cat bit her left hand, then scrambled up her back and onto her shoulder where it went for her neck.

Happy Wade was on the other side of the van when he heard Kristi scream, and he immediately came running.

“I just remember seeing this face, and it was trying to bite her right there on the side of the neck, and so I shoved my arm in,” Happy told WECT.

Happy pulled the animal off his wife and held the angry ball of fur out in the air. That’s when he realized what he was dealing with.

“Oh my God, it’s a bobcat!” he can be heard screaming.

The video shows Happy holding the cat at arms’ length as he carries it over to the lawn. He says the cat bit him three times, but he didn’t let it go. Instead, he carried it away from his wife and heaved it across his lawn like a shot-putter.

The bobcat tumbled through the air and landed on its back — not its feet — before scrambling up and running back to the driveway.

The video shows Happy pulling a pistol out of his pants and taking off in pursuit.

“I’m gonna shoot that f—er!” he shouts as he disappears from view.

Kristi told the Times that her husband pursued the animal and ultimately shot it, then turned it over to police.

The Pender County Sheriff’s Office confirmed that a bobcat was killed in the couple’s neighbourhood that day, and that it later tested positive for rabies, the Times reports.

The Wades were treated for minor injuries and given rabies shots after the incident.

Video of the incident exploded onto the internet late last week, where it was watched more than 12 million times on Twitter alone.

“That escalated so fast,” one user wrote.

“My guy just won every argument with his wife for the rest of their marriage,” another said. “’Remember that time I pulled that bobcat off you? Mmhmm. YOU take the trash out.’”

“Not happy about how he treated (that) animal,” one popular response said. “No need for that.”

Behavioural ecologist Ted Stankowich told the Times that he was “really shocked” by the video, because bobcats typically avoid humans and go after smaller prey.

“Any rabid animal is going to be far more aggressive around humans,” he said. “A normal bobcat would typically not come into a neighbourhood like that, into suburbia, let alone attack a person like that.”

Kristi says she and Happy are animal lovers and they did not want to kill the bobcat. Happy felt he had “no choice” but to put the rabid animal down.

“He saved my life,” Kristi told WECT. “I don’t know where I’d be or what sort of shape I’d be in had he not been there. It could have been so much worse.”

Beyoncé Wears a Metallic Oséree Outfit on a Boat

BBC’s Andrew Marr rebuked after telling John Kerry that US…