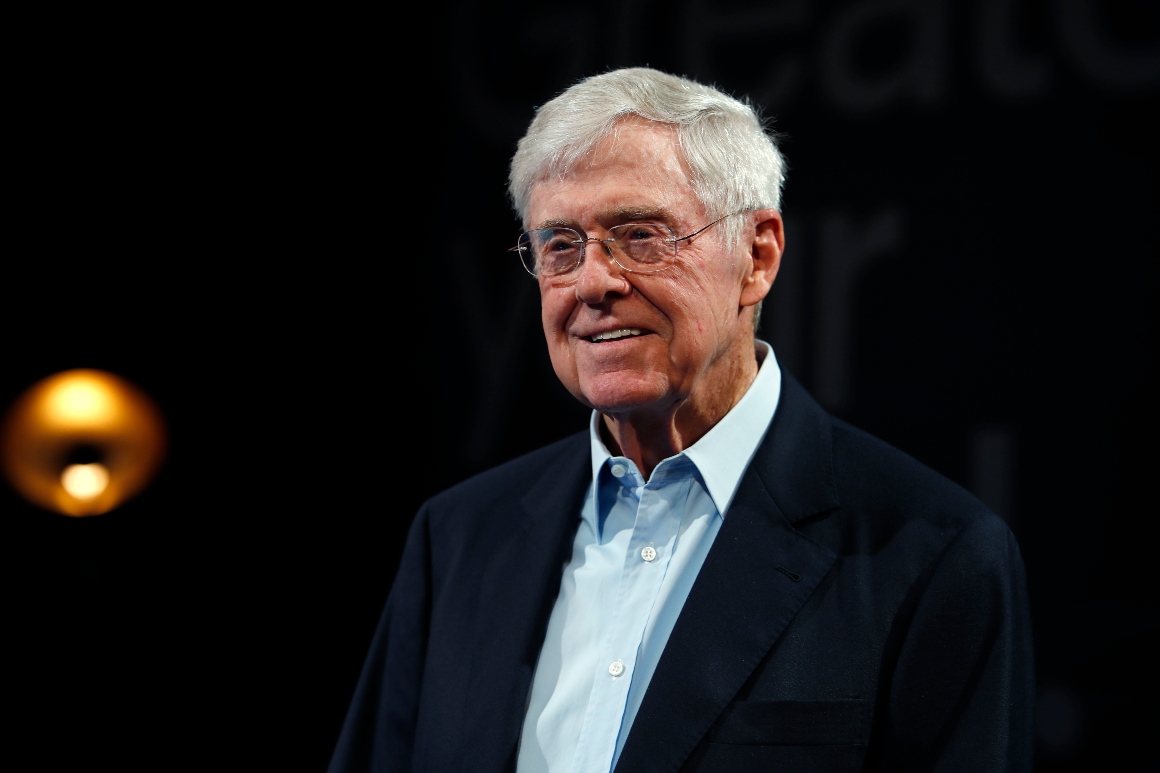 Seidel’s statement follows months of the network working to operate more independently of the Republican Party, as billionaire Charles Koch has become increasingly dissatisfied with the tactics and policies of President Donald Trump.

The Koch move comes after numerous corporate PACs began suspending their donations to Republicans who challenged President-elect Joe Biden’s victory last week. Many of those businesses were acting in response to pressure from clients and customers. The Koch action, coming amid a resounding silence among Trump allies, suggests that megadonors — a small class of brand-name billionaires who give from tens to hundreds of millions of dollars per election cycle — also feel that their reputations are on the line if they back lawmakers who supported Trump’s claims of election fraud.

Key GOP donors including the Ricketts family of Chicago, Home Depot co-founder Bernie Marcus and financier Ken Griffin declined to comment on their giving plans in the wake of the attack on the Capitol. While some are expected to continue backing candidates that are aligned with Trump — Chicago Cubs co-owner Todd Ricketts is the Republican National Committee finance chair — their unwillingness to defend the president and his supporters at a crucial moment could be a sign of their discomfort with the direction of the party.

The issue was made significantly more complicated after Florida Sen. Rick Scott, the incoming chair of the National Republican Senatorial Committee and a powerhouse fundraiser for his party, voted against certifying election results in Pennsylvania.

Scott — who is widely considered to be a 2024 GOP presidential candidate — rapidly tried to reassure skeptical, and sometimes angry, donors he is still well-positioned to lead the committee in a series of phone calls this week, according to two sources familiar with the calls.

Scott also sent a two-minute video to donors earlier this week marking the start of his NRSC chair role. Wearing a navy vest and baseball cap, the Florida senator avoided addressing either the violence at the Capitol or Trump’s months of insistence that there had been widespread voter fraud during the election. Instead, he emphasized the high stakes of the 2022 congressional elections and need to raise a “bazillian” dollars to retake the Senate.

“If we fail to become the party that is trusted to lead America into the future, Democrats will lead America to the past,” Scott says in the video. “They will erode our economy and our culture, and turn America into just another decaying example of socialism. We won’t let that happen.”

For his part, Trump will leave office with public support from only a few of the big-money allies who surrounded him when he arrived in Washington.

Casino billionaire Sheldon Adelson, who plowed more than $75 million into Trump’s reelection bid, died this week while being treated for non-Hodgkin’s lymphoma. But even he had grown uncomfortable with Trump’s claims of election fraud, allowing his newspaper, the Las Vegas Review-Journal, to editorialize against them. Trump 2016 bankroller Robert Mercer pulled back from big-money politics after his tactics during the 2016 race turned him into a household name.

Meanwhile, Blackstone CEO Steve Schwarzman, an unofficial Trump adviser, has since mid-November called for a peaceful transfer of power to the Biden administration and amplified his disapproval after the attack on the Capitol.

“The insurrection that followed the President’s remarks today is appalling and an affront to the democratic values we hold dear as Americans. I am shocked and horrified by this mob’s attempt to undermine our constitution,” Schwarzman said on the day of the riots. “As I said in November, the outcome of the election is very clear and there must be a peaceful transition of power.”

Trump has increasingly relied on small-dollar supporters instead of the mega-rich. Since the election, the president continued to raise money for his personal PAC, legal fights and the RNC, bringing in more than $200 million — the majority of it from donors giving less than $200.

The violence that is marking the end of his presidency could complicate Trump’s ability to raise money from bigger donors going forward.

“Nobody who has a leadership position at a big organization is going to give Trump money again,” said longtime Republican lobbyist and political adviser Charlie Black.

Another Republican fundraiser put it this way: “My gut tells me there would be, at least in the major dollar community, much less enthusiasm for giving to him if he were to run for president again.”

As anger at Trump reached a new all-time high this week, a slew of major corporations — from finance titans like Goldman Sachs to tech heavyweights Google and Facebook — paused all donations to lawmakers, and a smaller list of companies including AT&T said they were suspending giving money to members of Congress who voted against certifying the election results. On Wednesday the Charles Schwab Corporation, whose founder and namesake is a major Trump supporter, announced it would dissolve its corporate PAC entirely and donate any existing funds in its PAC account.

Nonetheless, it is not clear how long the backlash will last. Six months from now, donors and corporations may change their tune if Congress begins legislating again and the siege of the Capitol is firmly in the rear view, Black said.

“Even if people think it was a stupid vote, it’s hard to disqualify 139 Republicans from any future support if they’re on your side with a lot of issues,” said Black, referring to the Republicans who voted to reject electors from states where Trump claimed fraud.

Amazon says it repeatedly warned Parler about its violent content

Black Americans Are Getting Vaccinated at Lower Rates…