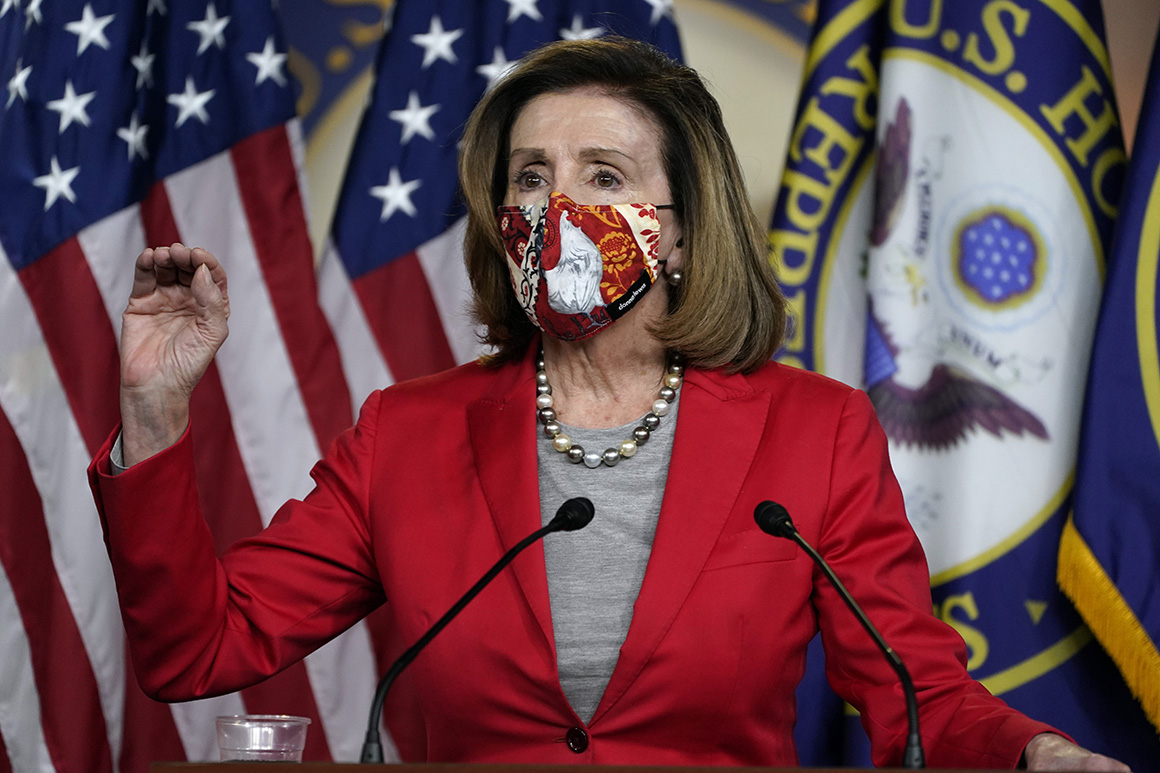 In her brief remarks to Democrats, Pelosi spoke about the importance of passing the “John Lewis Voting Rights Act” — a longtime priority for Democrats that has taken on greater urgency after the party battled instances of voter suppression in the 2020 election cycle. The bill, like many other Democratic priorities, didn’t have a chance in a GOP-controlled Senate under Majority Leader Mitch McConnell.

The sweeping voting rights overhaul is expected to be just one of several marquee agenda items Democrats pursue once President-elect Joe Biden is inaugurated later this month if the current Georgia vote tallies hold.

With complete control of Congress and the White House, Democrats are expected to quickly pursue another round of coronavirus relief — possibly including the $2,000 stimulus checks demanded by President Donald Trump and quickly embraced by Democrats late last month, but which many Senate Republicans rejected.

Pelosi in a statement later Wednesday morning promised a “unified Democratic Party will advance extraordinary progress” in the months ahead.

“We will pursue a science and values-based plan to crush the virus and deliver relief to struggling families, safeguard the right to quality affordable health care and launch a plan to Build Back Better powered by fair economic growth,” Pelosi said.

Democrats woke up to stunning news on Wednesday morning — not only had Democrat Raphael Warnock defeated GOP Sen. Kelly Loeffler, but 33-year-old Democrat Jon Ossoff was on the cusp of ousting GOP Sen. David Perdue, delivering Democrats full control of Washington for the first time since 2009.

Even under Democratic control, Biden’s agenda won’t be without roadblocks. The party’s control in both the House and Senate would be so tenuous that just a handful of House Democrats and even a single Senate Democrat could tank a bill.

The next two years will almost certainly be defined by the push and pull between the party’s left wing — which is emboldened after the historic turnout in Georgia following an enormous organizing effort — and the moderates, who believe they will be the true power center in such a narrowly divided Washington.

Still, Democrats across Capitol Hill were jubilant as they began planning for a far more expansive agenda under a Biden presidency that also came with control of both chambers. It’s a political fate virtually none of them had expected after a disappointing down-ballot finish in November, which shrunk the Democratic majority in the House to its thinnest margins in decades.

At another point in the Wednesday morning call, House Majority Leader Steny Hoyer took out his iPhone on the Zoom call and played Ray Charles’ “Georgia on my Mind” on speakerphone.

Then, Democratic leaders quickly pivoted to the other news of the day — strategizing on how to counter a doomed GOP attempt to overturn the results of the election by contesting Biden’s victory later Wednesday.

Jayapal: ‘There’s no trust’ among House…