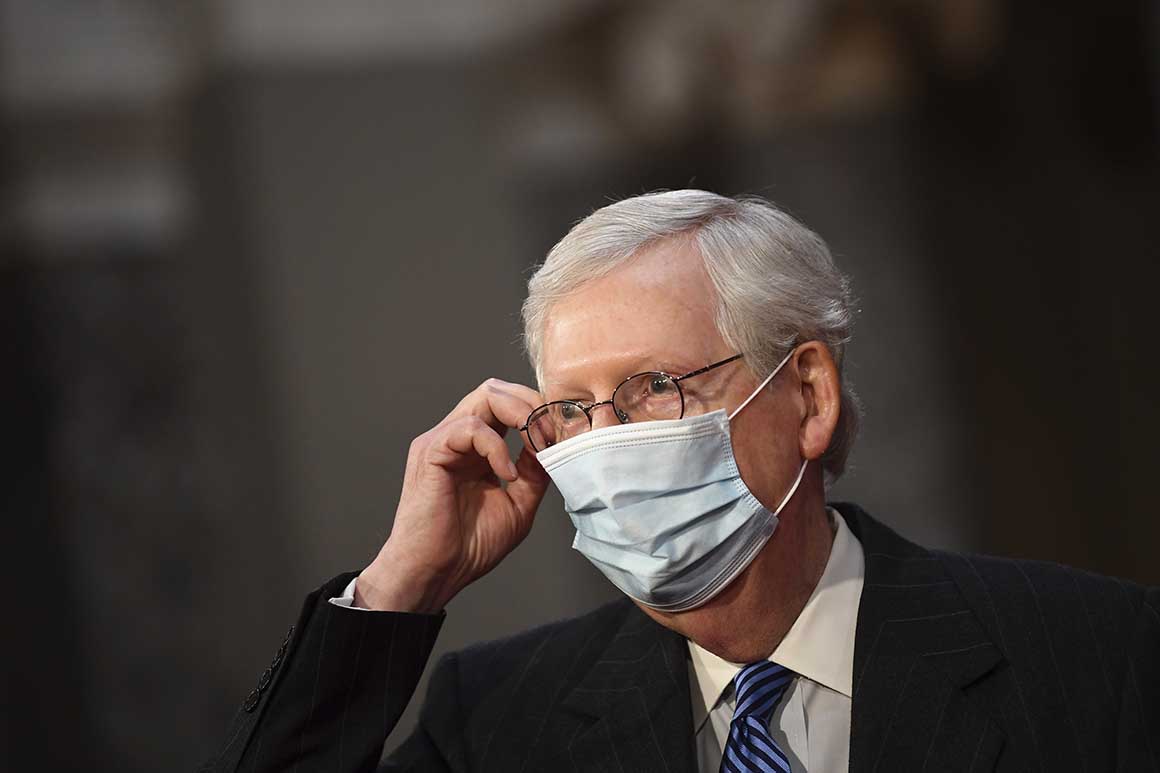 This week, McConnell is having plenty of private chats with his members but leaving the public arguments to the likes of Sens. Tom Cotton (R-Ark.) and Pat Toomey (R-Pa.). Nonetheless, as Senate majority leader, he will oversee the bulk of his conference rejecting Trump’s false claims that the election was stolen from him.

“He’s letting everybody reach their own conclusion here. That’s very much his leadership style on issues like this, is to not say much. I think he hopes we don’t have too many people vote to do this,” said one Republican senator aligned with McConnell. “Trying to convince people right now wouldn’t produce much of a result when you could just give them time to think about it.”

Republicans also said that if McConnell became the face of the resistance to the election results challenge on Jan. 6, it could backfire and dissuade Trump’s Georgia supporters from going to the polls on Jan. 5.

Several GOP senators who have signed onto the effort to contest the election results said they had not spoken to McConnell about the matter, including freshman Sen. Tommy Tuberville of Alabama and Sen. Steve Daines of Montana. And a few minutes after being sworn in, new Sen. Cynthia Lummis of Wyoming declined to discuss what GOP leaders’ reactions have been to her position: “A happy day for us. It’s been wonderful.”

“The leader’s priority is always to keep the majority. And I respect that,” Sen. Roger Marshall (R-Kan.) said when asked if McConnell had made a mistake by coming out against the effort. “Some of the greatest Super Bowl champions had a day of division.”

McConnell has clashed with Hawley in the past, after the Missouri senator took down one of Trump’s judicial appointees. He also stifled Hawley’s attempts with Democrats to approve the House-passed $2,000 checks bill last week, arguing the proposal was “socialism for rich people.”

Last month, McConnell warned his caucus that challenging the election results would force a “terrible vote” for members since it could be viewed as a referendum on Trump. Republicans face a tough Senate map in 2022, and Wednesday’s vote could be particularly uncomfortable for senators up for reelection.

Trump is already encouraging a primary challenge against Senate Majority Whip John Thune, after the South Dakota Republican predicted that the vote would go down like a “shot dog.” But on Monday, Sen. Rob Portman (R-Ohio) backed certification of the election results, a signal that Republicans on the front lines in the next election cycle are comfortable acknowledging that Biden won.

Still, the president has not completely hid his frustration with McConnell for recognizing Biden’s win. Trump recently sent around a slide to GOP lawmakers, where he took credit for McConnell’s victory against Democrat Amy McGrath. He later tweeted that he “saved at least 8 Republican Senators, including Mitch, from losing in the last Rigged (for President) Election.”

“I don’t think he’s enjoying it,” said a second Republican senator of McConnell’s role overseeing a split party. “He has to just make sure that this doesn’t splinter us all into several different factions.”

Judge denies release to alleged rioter who returned for…

Martin Lewis urges savers to handle overdrafts that are…

Jurgen Klopp says he’s at fault as Liverpool are…

Judge denies release to alleged rioter who returned for…