How Trump’s Crowd Obsession Could Bite Him Back

It is Donald Trump’s worst nightmare: giving his acceptance speech in front of a half-empty arena, facing an audience whose faces are covered in masks, muffling their cheers and chants.

But it is exactly what he may be facing if last month’s edict from authorities in Jacksonville, Florida, mandating masks for all indoor gatherings remains in effect through late August. There is a special twist to this ruling: The Republicans had moved their convention out of Charlotte, North Carolina—a city that had put safety rules in place about public gatherings—just so the president could get the kind of crowd he wanted.

As of now, the planned Jacksonville convention looks like another blow to Trump’s insatiable hunger for crowds. His campaign kickoff last month in Tulsa, Oklahoma, turned from a potentially thrilling launchpad to an embarrassment when the campaign claimed it had had more than a million ticket requests, and the president ended up speaking to whole empty sections of a 19,000-seat arena. So fearful was his entourage about the prospect of empty seats, according to press reports, that they went through the arena, removing social distancing signs, hoping for a crowd jammed together, in direct violation of the arena’s policy.

For Trump, the mocking press coverage (“Trump Rally Fizzles,” ran the New York Times headline) marked an end to five years of largely triumphant use of crowds. When he launched his campaign in 2015, Trump’s obsession with personal, physical crowds seemed almost antique. His rallies were somewhere between a tent revival and a rock concert, where he traded off the energy of people shouting back at him. They were unsettling to pundits, who doubted that the rallygoers were actual voters, but it was Trump who had the last laugh; the rallygoers turned out at the polls in November. And, in a sharp departure from previous presidents, Trump has made rallies part of a permanent campaign, complete with crowd chants of old favorites like “lock her up!” years after Hillary Clinton’s involuntary return to private life.

In another sense, however, the president’s insistence on his capacity to attract huge throngs has always loomed as a potential trouble spot. His first day in office—literally—was dominated by the spectacle of press secretary Sean Spicer demanding that the press disbelieve the obvious evidence that Trump had drawn less than an Obama-size inaugural crowd. (It was also evidence that Trump’s often casual relationship with reality would persist into his presidency.) And in bragging that he’d never had an empty seat at a rally, Trump was setting himself up for the kind of fall that Tulsa provided.

In fairness to Trump, he isn’t wrong that crowds matter. And he’s hardly the only politician or president eager to have, if not obsessed with, large audiences. In fact, it has been a key element of our political process, going back to the 19th century, when political parties held Fourth of July celebrations to draw big crowds for their candidates’ speeches. In at least one case, a presidential hunger for crowds drastically changed American history.

As with many things, Trump has revived a seemingly old-fashioned tradition and turned it into a modern political weapon. The question is, with the Covid-19 pandemic showing no signs of abating, can he pivot to a new world in which crowds are definitely unsafe, and in some places even illegal?

The president was John F. Kennedy, and he was talking to a White House team that was planning an ostensibly “non-political” swing through several Western states in the fall of 1963. Kennedy might be remembered today as the first TV president, with a knack for appealing to voters through a new mass medium, but he also had an understanding of the power of physical turnout. For JFK, whose reelection prospects were far from certain, it was crucial that he could show large, enthusiastic audiences in states he had failed to carry in 1960.

Why? The best answer comes from Jerry Bruno, the man who more or less invented modern political “advance”—the art and science of drawing large crowds for JFK, RFK and others. In his 1971 book “The Advance Man” (which I co-authored), Bruno set out to explain why, when it comes to crowds, size does matter: “When you can show people a candidate who can draw crowds, you can give them a sense of enthusiasm or excitement, you’re giving them something recognizable. [And] because the press and the media judge a candidate by the visceral, physical facts—how big was the crowd, how many people turned out … those stories create a sense of momentum or of failure. Those stories may persuade money-givers to go with a winner or hold back from a loser.”

Bruno’s key insight—and one of which Trump fell afoul in Tulsa—is that it’s not the numbers that matter. It’s the perception. His first rule of advance was “it’s always more impressive to fill a small hall than to half fill a huge hall.”

“It looks more impressive, it feels more exciting,” he wrote in “The Advance Man," “to walk into a five thousand seat hall that’s packed to the rafters than to see thirty thousand people in Yankee Stadium.” 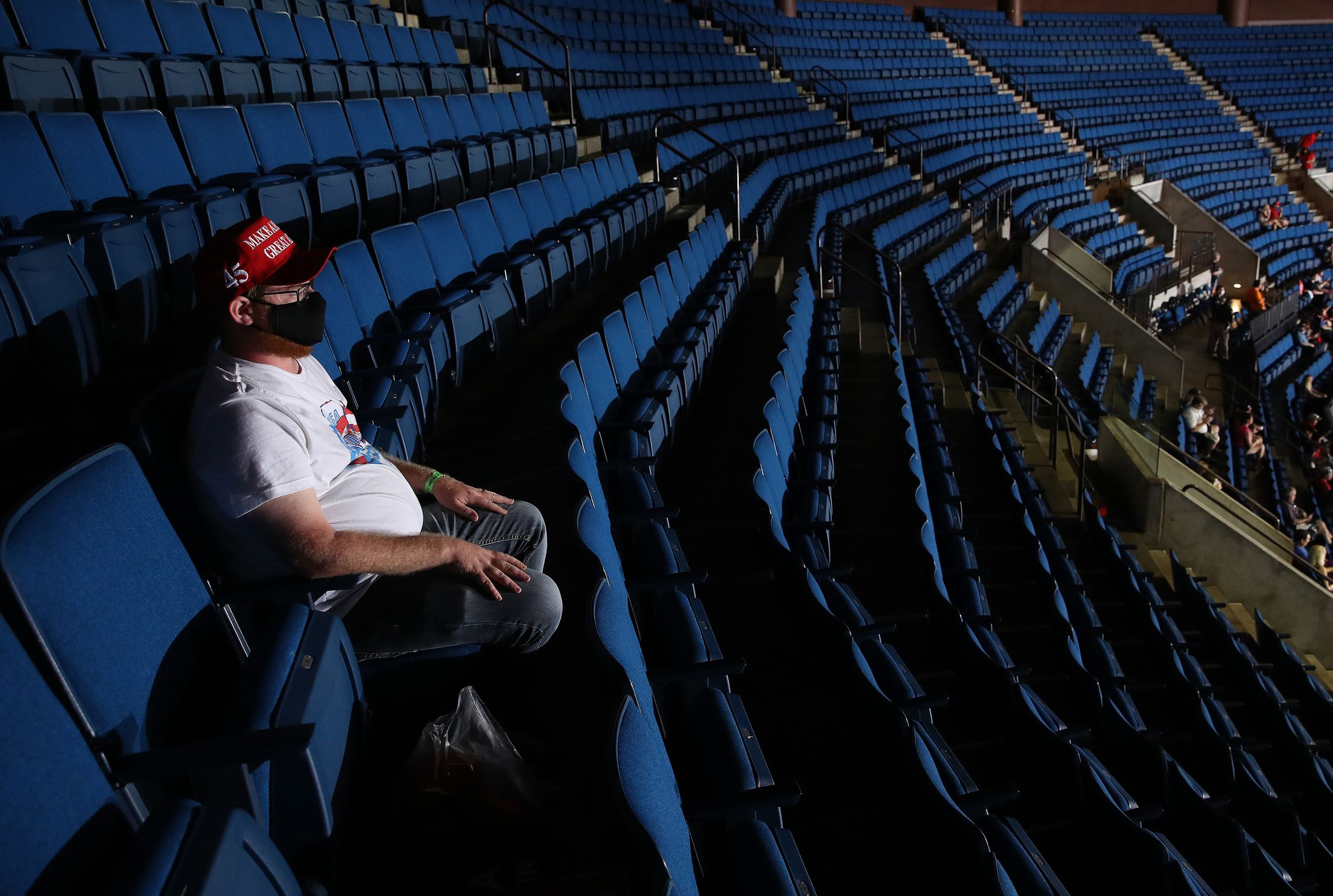 Bruno’s Law has clearly survived the test of time, and Trump’s Tulsa appearance is only the most recent example of how it can cut both ways. (The boasts of 800,000 or a million ticket requests from the campaign—which only added to the sense of letdown—will go down in history as acts of massive political malpractice.) Back in February 2012, Mitt Romney was giving a speech to the Detroit Economic Club in a meeting room inside Ford Field, where the Detroit Lions play. Because the crowd was larger than anticipated, the speech was moved from the indoor meeting room onto the field—in theory a good thing for Romney, except that photos the next day showed Romney surrounded by tens of thousands of empty seats. Had the meeting not been moved, he would have been speaking to a packed, standing-room-only crowd, and the narrative would have been the unexpected enthusiasm for his speech.

It was this very desire for a massive turnout that dramatically altered American history. In the fall of 1963, President Kennedy traveled to Texas—a must-win state for 1964—on an overtly political mission: to try to unite the feuding factions within the Democratic Party and to convince wealthy Texas Democrats that he was popular enough in Texas for them to open their wallets. It was why he brought his glamorous wife, Jacqueline, along on the trip; her presence was guaranteed to draw more people.

So when the rain stopped falling on Dallas late on the morning of November 22, it was good news for the White House. It meant that the bubble top on the presidential limousine could be removed, letting the crowds along the route get a better glimpse of the first couple. What no one could have imagined at the time was that it also made JFK a far easier target for his assassin.

Politicians have largely stopped traveling in open cars, but they haven’t stopped hunting for crowds. Barack Obama’s growing popularity in 2008 was measured in part by the large audiences he drew, and as noted, the size and intensity of Trump’s crowd in late 2015 was an early indicator of his appeal to the GOP base. Starting with Jimmy Carter, new presidents have marked their inaugurations by leaving their cars and walking at least part of the inaugural parade route.

It is, of course, entirely reasonable to argue that the pundits are actually right, and that these days crowds are no sure way to measure political strength. In the 2020 primaries, Bernie Sanders drew thousands; Joe Biden had trouble filling up a coat-check room. But the actual primary voters did not seem impressed by this metric; Biden ultimately cruised to a decisive victory over Sanders. And the Trump campaign surely had a point when it noted that while barely 6,000 people may have filled the Tulsa arena, more than 6 million saw the event on Fox News and other outlets.

There’s a good case to be made that Trump’s demand for packed crowds, and his indifference (if not hostility) to masks, means that his hunger for old-style rallies is literally putting his most ardent supporters in danger. His speeches over the Fourth of July were, perhaps, a preview: no masks at either event, and an audience crowded together at Mt. Rushmore. Any campaign, indeed any organization, that takes the warnings of public officials seriously would not bring large numbers of people together in an enclosed room to cheer, sing and shout. But deprive Trump of those rallies, those crowds feeding that insatiable hunger for approval, and Trump might as well be cut off from oxygen.

In Jerry Bruno’s wake, generations of political operatives across the political divide have ventured across the country, booking arenas, commandeering cars and buses, persuading high school bands to play along a parade route, papering halls with “free” tickets. This fall, the impulse to stick with venerable tools of the political trade and the health of the American electorate are in fundamental conflict. Add to that the president’s desires, and we may see a true departure from the past, with the two major party campaigns offering radically different approaches. Trump’s team will be looking for every possible chance to deliver to Trump the traditional spectacle of packed arenas and frenzied crowds for which he hungers, in part because the man himself just can’t do without it. Biden’s camp will be much more likely to heed the warnings of public health officials—which will mean finding some way to build excitement without resorting to the tools that have defined campaigns, and will ultimately prove a test of whether the stagecraft of politics really can move beyond its ancient roots.

PlayStation 2 games play quite well on the Xbox Series S