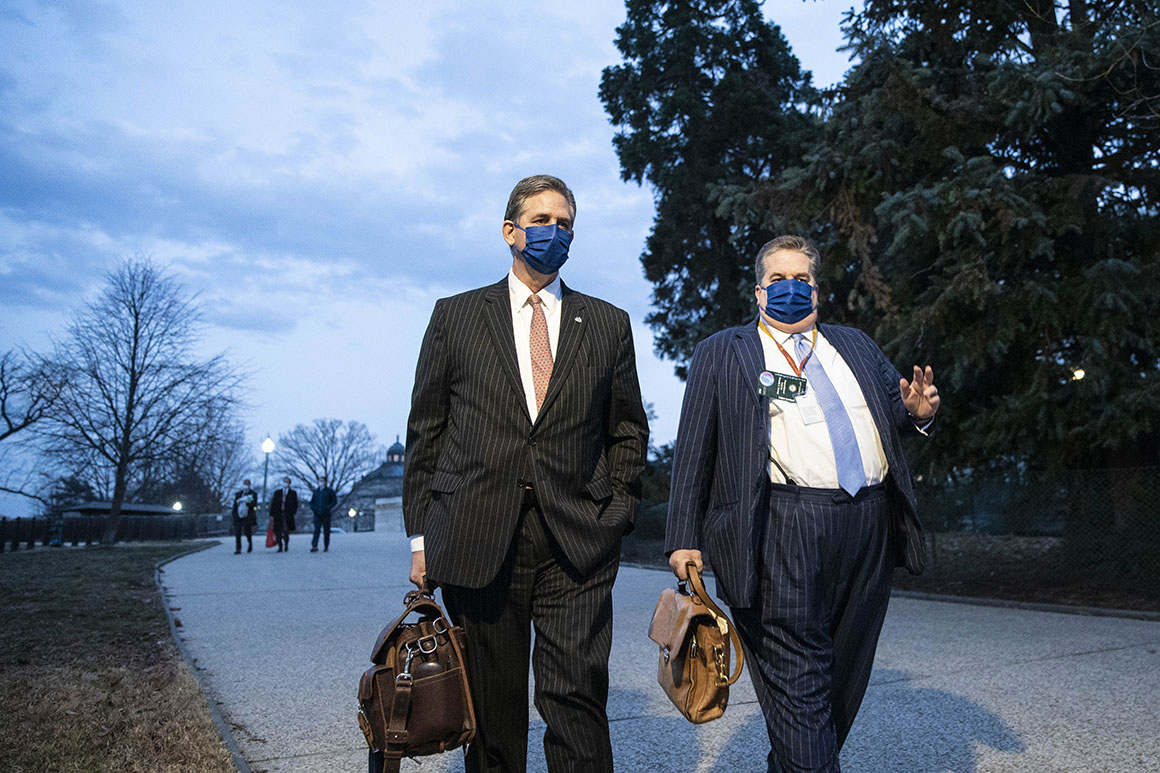 Cassidy even voted with 55 other senators that the trial should go forward and was not unconstitutional, changing his position from last month. “If I’m an impartial juror and one side is doing a great job and the other job is doing a terrible job on the issue at hand? As an impartial juror, I’m going to vote for the side that did the good job.”

Cassidy’s shift was the most electric moment of the day and highlighted what could only be seen as an incoherent defense by Castor. The Trump lawyer singled out senators who are mulling conviction and conceded he had changed his entire presentation after three of the House impeachment managers, led by Rep. Jamie Raskin (D-Md.), made their opening arguments.

“I thought the first attorney for the president today did not present a case, which surprised me. Did not make any arguments,” said Sen. Susan Collins (R-Maine), who also voted to uphold the constitutionality of the trial. “The second attorney representing the president clearly did, and did a competent job. I’m puzzled by the presentation of the first attorney.”

David Schoen, the second attorney, offered a more conventional presentation appealing to the GOP. But he bobbled the timeline of the impeachment trial, blaming House Democrats for declining to send the article until Trump was out of office. Yet the Senate was on recess during that period — which made it impossible for Trump’s trial to start without the Senate deciding to reconvene on an emergency basis.

Generally, Republicans were warmer on Schoen. But Sen. John Cornyn (R-Texas), a former state Supreme Court judge and state attorney general, conceded of the presentation: “Not one of the finest I’ve seen.

“The first lawyer, just rambled on and on and on and didn’t really address the constitutional argument,” Cornyn said. ”Finally the second lawyer got around to it.”

“I was really stunned by the first attorney who presented for the former President Trump, couldn’t figure out where he was going. He spent 45 minutes going somewhere,” said Sen. Lisa Murkowski (R-Alaska). “Mr. Schoen did a better job, but I think they sure had a missed opportunity with their first attorney.”

Cassidy said he leaned over to Sen. Ted Cruz (R-Texas) at one point and asked if Castor and Schoen, another attorney, were confronting the day’s issue: whether the trial was constitutional. Cassidy said Cruz replied: “Not now.”

“I don’t think the lawyers did the most effective job,” Cruz told reporters later.

“The House managers did a much better job,” Cassidy said, in summary.

During one portion of the arguments, Castor mentioned Sens. Pat Toomey (R-Pa.), Bob Casey (D-Pa.) and Ben Sasse (R-Neb.), referring to Toomey colloquially as “Pat” and throwing out unnamed Nebraska court cases in a nod to Sasse. Both senators voted with Democrats to uphold the constitutionality of the trial.

Sasse was squinting while Castor was talking about him, seemingly confused at what he was hearing. He then turned to Sens. Tim Scott (R-S.C.) and Rob Portman (R-Ohio), and his fellow Nebraska Republican Deb Fischer turned her back to whisper something to him.

“I think we spent too much time maybe visiting about Pat Toomey and Casey,” said Sen. Joni Ernst (R-Iowa).

Still, Schoen told reporters later Tuesday that he didn’t expect any changes to the legal team or its structure of arguments. Senators amenable to the Trump team’s position chalked it up to a lack of preparation. Trump’s first legal team fell apart barely a week ago, leaving Castor and Schoen to quickly devise a strategy to defend Trump.

“It’s a tough assignment,” Sen. Marco Rubio (R-Fla.), who is against the impeachment process, said of Castor’s role. “This is a very different kind of jury. And I don’t think he’s been on the case very long and he hasn’t had the same time to prepare. My sense is he probably did the best he could given the circumstances.”

Cassidy was the only Republican who flipped his vote after last month’s initial tally on a procedural motion on the trial’s constitutionality. Despite the browbeating Trump’s team took Tuesday from Republican jurors, GOP senators said it was further evidence that Trump is on a glide path to an acquittal.

“I think that says a lot,” Sen. Mike Braun (R-Ind.) said. “The biggest thing it says is it’s going to be hard to do anything from this point forward.”