On its face, the legal showdown between Georgia Gov. Brian Kemp and Atlanta Mayor Keisha Lance Bottoms over the legality of the city’s face mask mandate is a dispute over the right balance between personal freedom and public health.

But the increasingly bitter feud between the Republican governor, an acolyte of President Donald Trump, and the Democratic mayor, a possible vice presidential pick who, herself, has tested positive for Covid-19, is also a microcosm of the fault lines — political, racial, geographic — hampering the country’s response to the coronavirus pandemic and fueling an outbreak that now appears to be spinning out of control.

Atlanta City Council Member Antonio Brown says the failure to contain the virus is hurting “our most vulnerable communities, which are black and brown communities,” the most. “While we’re pointing fingers, we’re not getting the work of the people done. We’re not saving lives. We’re not protecting our communities that need to be protected.”

The data matches his claim: the parts of the country where the coronavirus outbreaks are now the largest are metro areas across the country’s south and west, areas with local Democratic leaders and large communities of color in states that are predominantly governed by Republicans. That’s heightened the political tension between governors like Kemp, who is playing to one constituency in the state, and Bottoms and other city leaders fighting to protect their local communities. 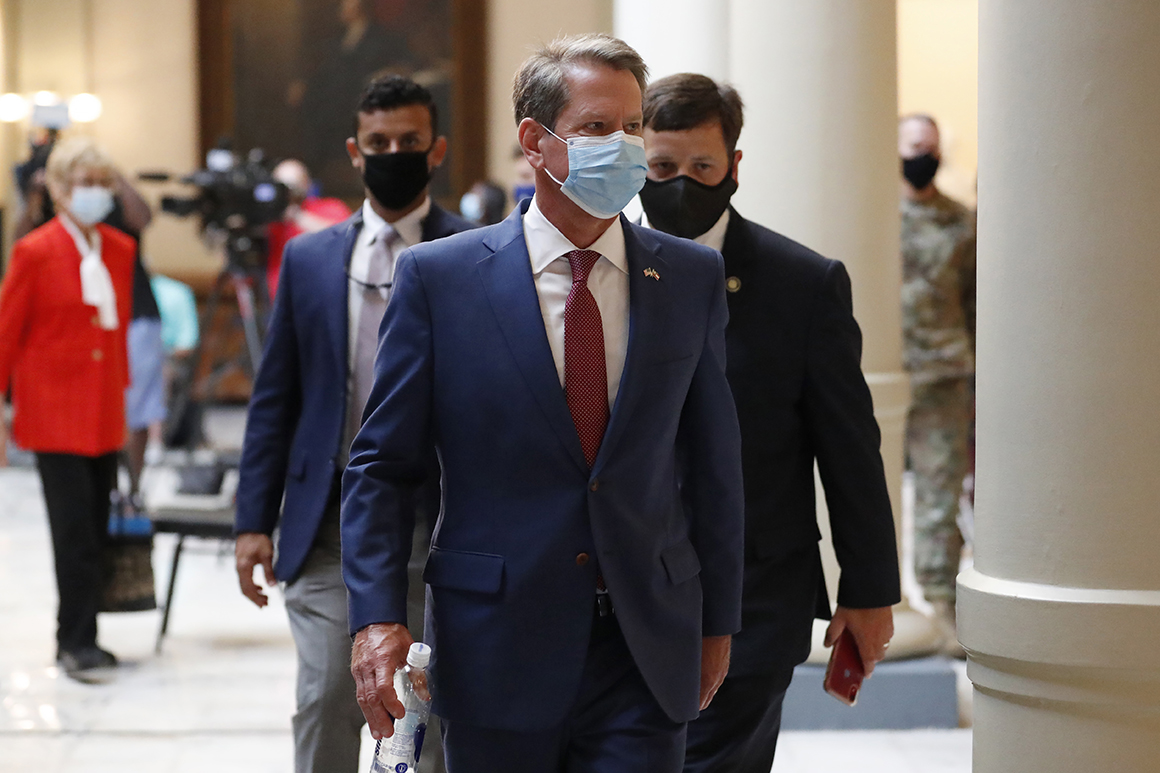 The move, he said, "is on behalf of the Atlanta business owners and their hardworking employees who are struggling to survive during these difficult times." That echoes arguments made by President Donald Trump and fellow GOP governors, who complained the country’s response has overreacted in its lockdowns and restrictions as it seeks to contain the virus, and that the economic and personal damage of lockdowns should be weighed more heavily. The rhetoric plays well with Republicans’ predominantly white political base, which have been skeptical of public health advice, a distrust fanned from within the White House.

On Tuesday, White House trade adviser Peter Navarro attacked Dr. Anthony Fauci, the foremost U.S. expert on infectious disease, in a USA Today op-ed, writing that the director of the National Institute of Allergy and Infectious Diseases has been “wrong about everything I have interacted with him on.”

In an interview on the “Today Show,” Friday, Bottoms said she didn’t think it was happenstance that Kemp’s lawsuit “came the day after Donald Trump visited Atlanta,” pointing out that the president did not wear a mask at the airport. “This is the same governor who didn’t know until well into the pandemic that it could be spread by asymptomatic transmission. He didn’t go to Emory for guidance. He didn’t go to the CDC for guidance.”

Kemp and other Republican governors who pushed most aggressively to reopen communities and restart economic activity are now presiding over sharp upticks in coronavirus infections and rapidly filling hospitals. And it’s urban areas and places with large communities of color, like Atlanta, that face the toughest consequences.

Since Kemp re-opened George businesses in late April, daily cases have been on the rise, at more than 3,000 people testing positive per day. Of the more than 3,100 total reported deaths in the state, nearly half are African American, despite making up 32 percent of the population.

And Atlanta and its suburbs are at the epicenter. Fulton County, where Atlanta is based, has reported 335 deaths, while the surrounding counties of Gwinnett, DeKalb and Cobb have reported a combined 642. The area is 51 percent Black.

A Center for Disease Control study published June 17 found that 79 percent of Covid-19 patients hospitalized in the Atlanta metro area in March and April 2020 were Black.

According to the CDC, Georgia ranks fourth among U.S. states when it comes to the number of Covid-19 cases reported in the past seven days, behind fellow Sun Belt states, Texas, Florida and California and just ahead of Arizona. Available data on infections, hospitalizations and deaths in those states reveal a similar racial divide, with a disproportionate effect on the Black and Latino populations.

The CDC, for example, has found that Hispanic residents of Harris County, home to Houston, are four times as likely to be hospitalized due to Covid-19 than their white counterparts.

Face coverings, public health experts agree, are one of the best ways to slow coronavirus transmission.

“The guidance is clear from the public health perspective. How that’s enforced is something different,” said Dr. Stephanie Miles-Richardson, Professor of Community Health and Preventative Medicine at the Morehouse School of Medicine. “The coronavirus doesn’t have any kind of politics or any political affiliation.”

While mask-wearing remains anathema to many conservatives, more and more Republican officials are acknowledging their necessity. Texas Gov. Greg Abbott reversed course and issued a statewide mask mandate at the beginning of July. Arkansas Gov. Asa Hutchinson followed this week. Florida Gov. Ron De Santis continues to buck pressure to do the same, but aides also said he would not challenge local masks requirements in his state.

In Georgia, several local leaders have followed Bottoms’ example and defied Kemp’s order by making masks mandatory in public spaces. Kelly Girtz, Mayor of Athens, Kemp’s hometown, said he plans to keep the mask mandate in place in his city.

“I find it unfortunately, a waste of our valuable time and energy, when we really need to be working together to do the things that are demonstrably healthy,” he said. “I’ve been in local government now for 14 years. And I’ve seen political winds and alliances come and go. I think what has to be steady is doing the right thing for the people, the community and the right thing right now, is implementing a foundation for safety.”