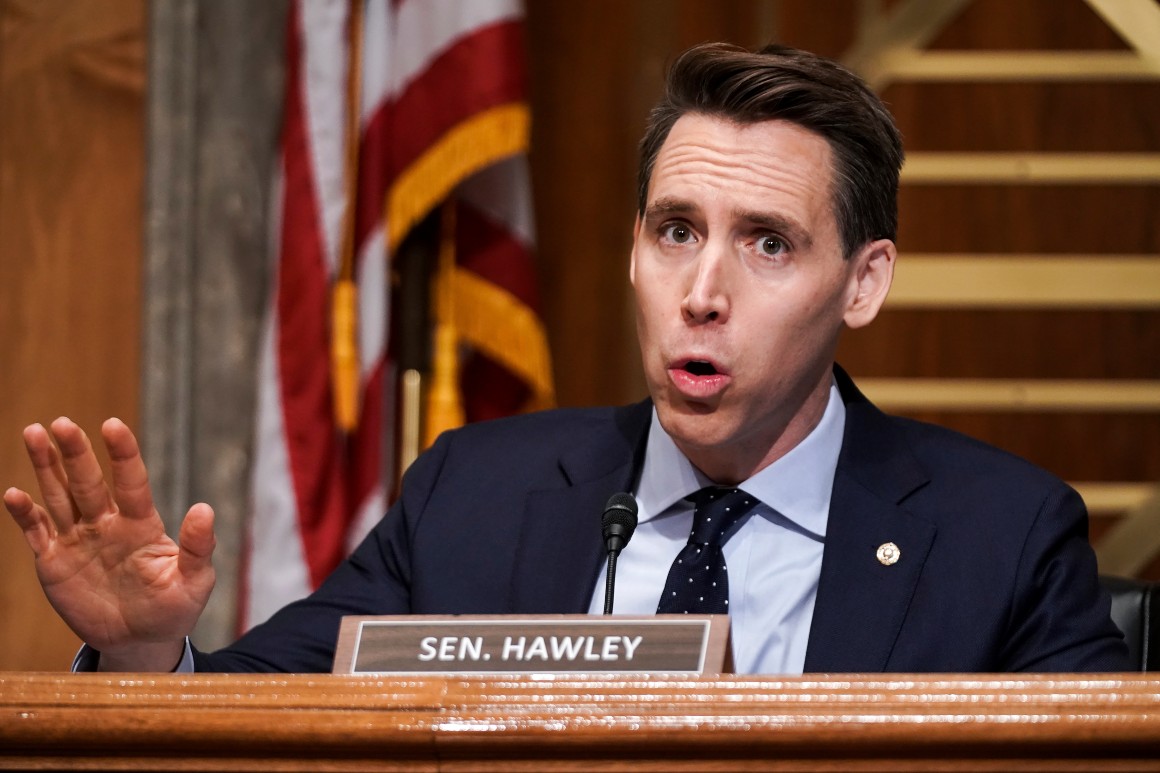 “I think it’s awful. I am going to support my oath to the Constitution. That’s the loyalty test here,” said Sen. Lisa Murkowski (R-Alaska).

Sen. Mitt Romney (R-Utah) called Hawley’s move “disappointing and destructive. And borrowing from Ben Sasse it’s ambition pointing a gun at the head of democracy.” Sasse (R-Neb.) said this week that “adults don’t point a loaded gun at the heart of legitimate self-government.”

“I’m going to vote to certify the election,” said Sen. Roger Wicker (R-Miss.) of Hawley’s effort. “I don’t think it’s a good idea and I don’t understand his reasoning.”

Already it’s become clear the effort will fail given the public opposition from those senators and others like Sens. Shelly Moore Capito (R-W.Va.), Susan Collins (R-Maine) and Richard Burr (R-N.C.), who flatly said “no” Friday when asked if he would join Hawley. A simple majority is enough to certify Biden’s wins, and there are 48 Senate Democrats.

But the vote on Jan. 6 to certify Biden’s win is viewed within the GOP as a painful litmus test. Republicans either risk blowback or a primary challenge by approving Biden’s win amid Trump’s baseless claims of widespread fraud, or they can align themselves with Trump’s attempt to subvert the election results.

Trump has already shown little regard for those who are criticizing the efforts in the House and Senate to block Biden’s win. The president attacked Senate Majority Whip John Thune (R-S.D.) for the second time this week after Thune said Trump’s efforts to overturn Biden’s win will go down like a “shot dog” in the upper chamber.

The president urged Gov. Kristi Noem (R-S.D.) to run against Thune, though Noem has already said she will not run against Thune. Trump in a tweet called Thune a “RINO” on Friday — a Republican In Name Only.

“Finally, an attack tweet. What took him so long?” Thune, the No. 2 Senate Republican, said of Trump. He said there’s been no effort to patch things over: “I’m not sure what I did to be deserving of all that. It’s fine. I’m not sure anything changes his mind once he makes it up.”

Hawley is unlikely to stand alone as Sen. Barbara Boxer (D-Calif.) did in 2005 when she was overruled in a 74-1 by members of both parties after objecting to George W. Bush’s Ohio electoral votes. Privately Senate Republicans estimate a handful of Republican senators could vote against certification of at least one state alongside Hawley, a smaller percentage than the more than 100 House Republicans that are expected to try and stop Biden’s win.

“I won’t tell other folks what to do,” said Hawley, who said he’s had contact with other senators after making his announcement. “I don’t have the power to overturn anything. My objective in this is, as I’ve said repeatedly, is this is my one opportunity in this process to stand and be heard.”

Hawley said he hasn’t decided whether he will only challenge a single state or enough states to change the electoral college result. He specifically mentioned Pennsylvania earlier this week as an example of a state that “failed to follow their own state election laws.”

Senate Majority Leader Mitch McConnell (R-Ky.) has warned against challenging the election privately and pressed Hawley for an explanation in a conference call on Thursday, though Hawley was not on the call. Hawley responded by asking senators with questions to reach out to him. Capito said Hawley’s move is “certainly not what the leader would want, because he’s been very explicit about that.”

But Republicans aren’t whipping against Trump. Thune said the GOP leadership is letting members “vote their conscience.” He indicated he will oppose the effort absent some unforeseen evidence because Congress has no legal authority to change election results approved by the states and certified by the electoral coverage.

“It seems to me this is an exercise in futility,” said Sen. John Cornyn (R-Texas), who said he would offer a longer explanation next week when Trump’s efforts are stopped by Congress. “There are probably 70 million people who would rather see Trump elected. So I think it may not be very popular [in the GOP]. But sometimes you’ve got to do unpopular things because it’s the right thing to do.”

Still, not everyone is dismissing the challenge to Biden’s certification. Sen. Ron Johnson (R-Wis.) said earlier this week he supports Hawley’s effort.

And Sens. Mike Braun (R-Ind.) and Marsha Blackburn (R-Tenn.) both said they were still weighing their options. Blackburn argued that “people are quite concerned about voter fraud and transparency” and Braun said he’s “still thinking about what to do.”

“It’s a protest vote only. Because in my opinion there’s zero chance that anything will come from it. The House is not going to overturn and I don’t think you’ll even get close in the Senate,” Braun argued.

And several other senators on Friday said they didn’t want to talk about it. Sen. Pat Toomey (R-Pa.), who opposes challenging the election, said he would address the issue “pretty thoroughly next week.” Sen. Marco Rubio (R-Fla.) said he won’t discuss the issue until Jan. 6 and Sen. Joni Ernst (R-Iowa) declined to comment.

“Ask me that on Jan. 6. There’s a lot to think about,” said Sen. Chuck Grassley (R-Iowa), the most senior GOP senator.

‘This is your time’: Obama congratulates Biden…

‘This is your time’: Obama congratulates Biden before…