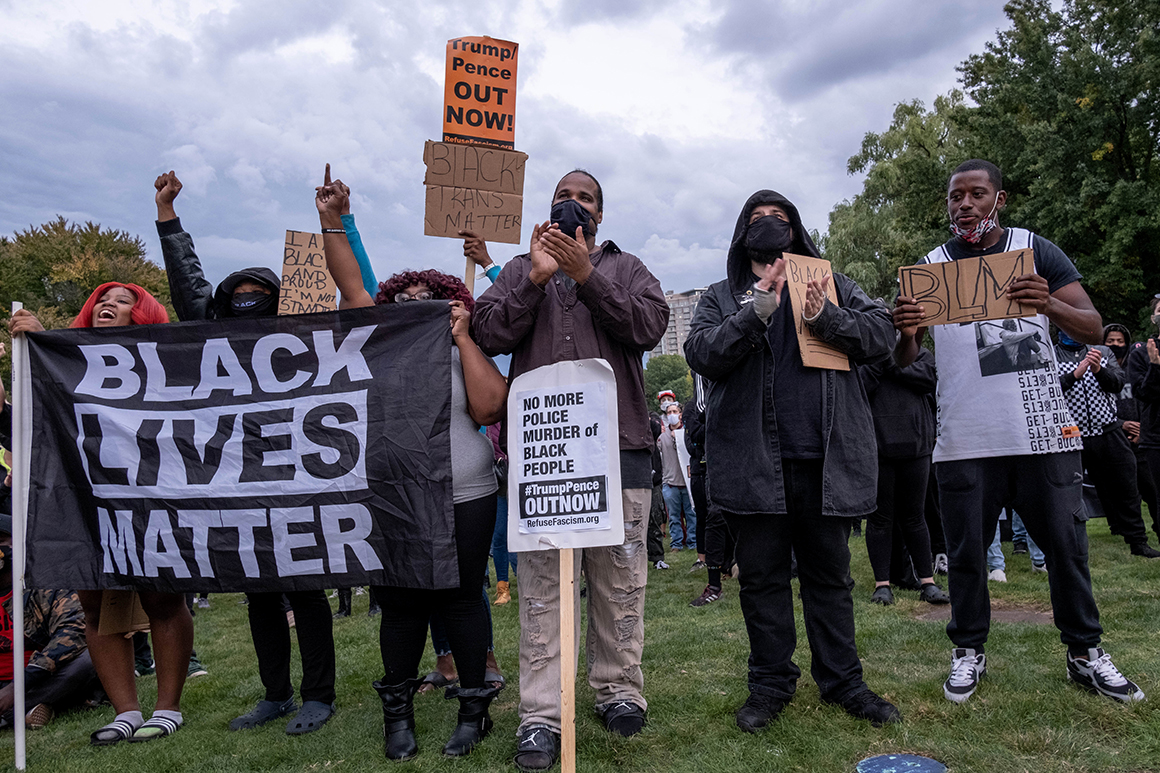 “It is the strongest anti-rioting, pro-law enforcement piece of legislation in the country,” DeSantis said during the bill’s signing. “There’s nothing even close.”

Following the summer’s widespread racial justice protests after the killing of George Floyd, Republican lawmakers in 34 states have introduced sweeping anti-riot bills, many of which would enhance sentences for those convicted of crimes at protests that turn violent, according to the International Center for Not-For Profit Law. Some would also make it much more difficult for cities to attempt to pull funds out of its local law enforcement’s budget, a nod to the “defund the police” movement.

Democrats and civil rights groups have spent months warning that these bills will infringe on citizens’ rights to protest, affect rates of incarceration and could be an attempt to silence Black Lives Matter and other racial justice protesters.

Florida Democratic state Rep. Kevin Chambliss called his state’s anti-riot legislation, HB1, “the scariest piece of legislation I have seen in my life.”

Elly Page, a senior legal adviser at the International Center for Not-For Profit Law, has tracked anti-protest laws for about four years, beginning primarily in the wake of the Dakota Access Pipeline demonstrations. The current collection of bills, she says, is a clear legislative backlash to the racial justice protest movement.

She noted that states didn’t need to experience riots or widespread looting last summer in order to press ahead with anti-protest legislation.

“There are a dozen bills that have been introduced in Oklahoma,” Page said. “Obviously, the protests — especially last summer — took place in almost every state in the country, if not every state. But certainly, massive ones — the kind of ones that these bills are targeting — you didn’t see widespread looting in Tulsa. You could say the same for Florida.”

So far, Tennessee, Florida and Oklahoma are the only states to pass “anti-riot” legislation. Oklahoma’s governor approved its “anti-riot” bill, HB 1674, on Wednesday.

Many of the sponsors of these bills maintain that they’re not targeting peaceful protesters but those responsible for violent riots that lead to looting and widespread property damage. However, research shows that the vast majority of demonstrations over the summer were peaceful.

“This country was built on lawful protest, and it’s something that we must maintain — our citizens’ right to do so,” Kentucky Republican State Sen. Danny Carroll said earlier this year at a hearing. Carroll sponsored Kentucky’s measure in the state’s Senate. “What this deals with are those who cross the line and commit criminal acts.”

But critics say that these bills are an overreach that will end up doing much more than what bill sponsors say they will. Black Lives Matter Global Network Foundation, in a statement to POLITICO, wrote that the current slate of legislature would, if approved, grant immunity to those who attack peaceful protesters and shifts the focus from pro-Trump supporters who raided the Capitol on Jan. 6.

“We are seeing Republicans conflate our movement with the white supremacist rioters who attacked the Capitol,” Black Lives Matter Global Network Foundation stated. “This poses a real and direct threat to Black people who are organizing for liberation.”

Democratic lawmakers have also criticized these bills because of the impact enhanced sentences will have on the country’s existing mass incarceration rate. By June last year, the tally of arrested protesters had already reached 10,000 on charges such as violating curfew, burglary and looting. It’s unclear how many, if any, were convicted.

Increased jail time means that states will have to spend more money housing inmates, which can affect state economies. The ACLU of Florida estimates that longer prison time could lead anywhere from $2.7 to $7.2 million in increased spending for the state. In total, the estimated economic impact of this bill could cost the state, and its residents, up to $67.1 million.

Gary Daniels, the chief lobbyist for the ACLU of Ohio, also pointed out the expansive nature of some of these “anti-riot” bills, including one of several that were introduced in Ohio, that he says would create an ambiguous definition of “riot,” or taunting a police officer, if enacted. The vagueness would leave both demonstrators and law enforcement confused as to what actions are actually arrestable offenses.

“When [these bills] are not specific enough, problems arise,” Daniels said. “And that’s particularly true with free speech and policing policies and laws. You leave it open to interpretation so that nobody involved knows what is illegal, and what is not, what falls under the bill, and what does not.”