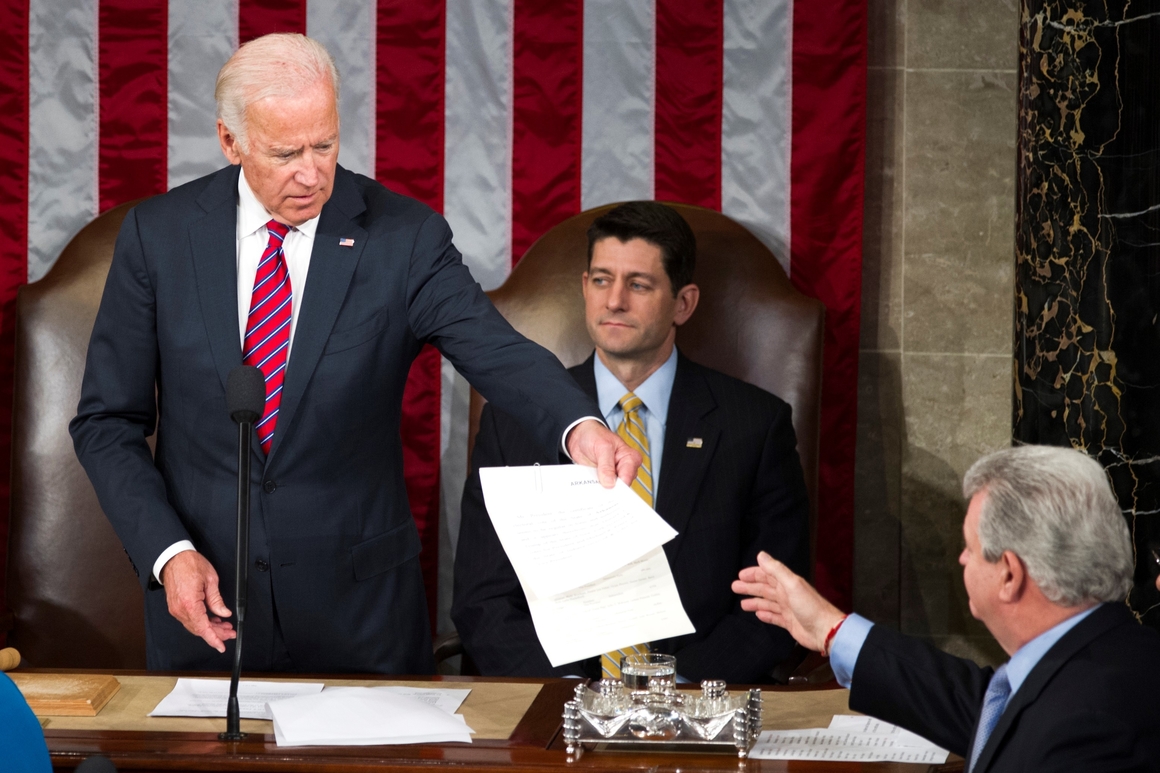 They argue that the constitution makes clear that states — not Congress — are responsible for selecting electors.

“We must respect the states’ authority here,” the lawmakers wrote in their statement, obtained by POLITICO. “Though doing so may frustrate our immediate political objectives, we have sworn an oath to promote the Constitution above our policy goals. We must count the electoral votes submitted by the states.”

A handful of Senate Republicans have come out forcefully against the Trump-driven challenges as well. In addition to Sens. Ben Sasse, Mitt Romney and Pat Toomey, who forcefully rebuked those mounting challenges, Sens. Susan Collins and Roger Wicker indicated Sunday they would oppose challenges as well. The Washington Post also revealed Sunday that Trump, a day earlier, called Georgia’s secretary of state Brad Raffensperger and pressured him to “find” enough votes to reverse Biden’s win in the state.

Some Trump allies have sought to throw out the procedures altogether. They’ve hoped to empower Vice President Mike Pence, who will preside over the session, to unilaterally reject Biden’s electors; it’s unclear if those members will attempt to object to or change those rules when they come to the House and Senate floor Sunday evening. Rep. Louie Gohmert (R-Texas) last week sued Pence in an effort to have the procedures thrown out, but he was unceremoniously dismissed by two federal courts.

The procedures, if adopted, require Pence to introduce all papers “purporting” to be electoral votes. He is to read them alphabetically by state and offer lawmakers a chance to issue any objections along the way. These longstanding procedures permit as few as two lawmakers — a single House member and senator acting together — to grind the process to a halt, forcing the House and Senate to break up the joint session and debate the challenges for two hours apiece, before voting on them and returning to the joint session.

There is virtually no doubt that the challenges to Biden’s victory will fail. The Democratically led House will oppose them, and enough Republicans in the closely divided Senate have indicated they will reject any challenges as well. But the magnitude of the push — with dozens of House Republicans and at least a quarter of the Senate GOP — will be unprecedented, aided by the full-throated backing of the sitting president, who has encouraged supporters to convene in Washington en masse on Jan. 6 to protest the session.

Some Trump allies are encouraging Pence to try to take control of the session regardless of the rules and simply refuse to introduce Biden’s electors in states that Trump has challenged. But Pence declined to embrace that strategy in court, and Congress would similarly refuse to entertain such an effort.

The processes in the proposed rules are enshrined in a federal law passed in 1887 called the Electoral Count Act, a statute passed to address the disastrous election of 1876. The procedures have been embraced by every Congress since then to govern the Jan. 6 Electoral College certification meeting. However, constitutional scholars have debated whether the House and Senate can be bound by the 130-year-old law and whether they may supplement it to clearly define some of its vague aspects, such as Pence’s authorities as the presiding officer and the law’s requirements that all “purported” electoral votes be introduced.

One of the questions about Pence’s role is whether he intends to introduce slates of Republicans who claimed to cast electoral votes for Trump in key states that Biden won. Trump’s would-be electors met on Dec. 14, the day the formal Electoral College members met in their respective state capitals and held mock sessions to cast votes for Trump. If he does, Congress would be required, by law, to count only those certified by the state governments — but it would continue to amplify Trump’s efforts to delegitimize the process.

Diamonds Are Not Just for Jewelry Anymore

One of Trump’s final acts will allow former aides to…

McCarthy voices ‘concerns’ with Cheney after…

Will There Be a Trump Presidential Library? Don’t Count On…

Banana Republic Valentine’s Day Gifts For Her Under $100

McCarthy voices ‘concerns’ with Cheney after…

Will There Be a Trump Presidential Library? Don’t Count On It.