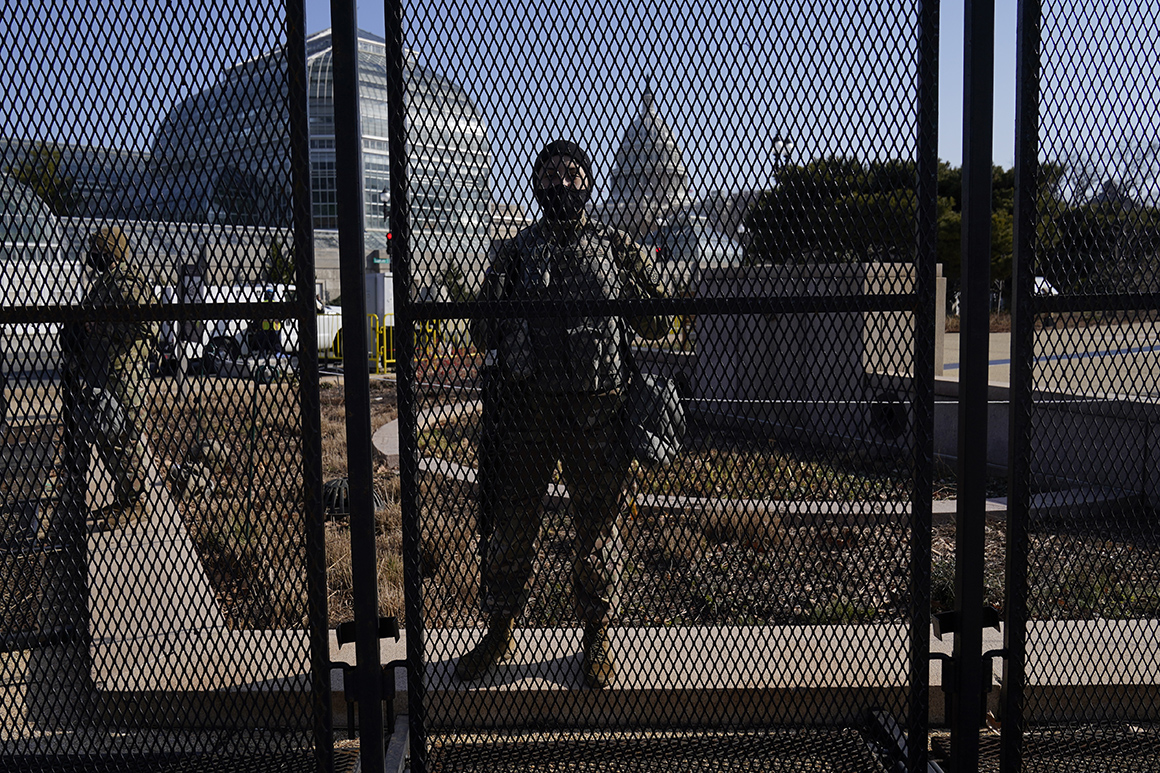 “There has been no decision on any extension requests,” said National Guard spokesperson Darla Torres.

The request from Capitol Police underscores the gravity of the ongoing security threats to the building that have lingered after the Jan. 6 insurrection, which threatened the transition of power from Donald Trump to President Joe Biden. The prospect of open-ended troop deployment on the Hill comes amid warnings from federal law enforcement officials about a potential attack on Congress by a militia group on Thursday and an unspecified plot to attack the Capitol during Biden’s State of the Union address, which has yet to be scheduled.

A Capitol Police spokesperson did not immediately respond to a request for comment. Speaker Nancy Pelosi said Thursday that the decision to extend the Guard’s stay would be up to Capitol security officials.

“The issue about the National Guard is one that will be made by the Capitol Police and the Police Board,” Pelosi said. “We should have them here as long as they are needed.”

A Department of Homeland Security intelligence bulletin issued on Tuesday noted that extremists have eyed May 20 as another date for an attempted attack.

Lawmakers were already grappling with the collective stress and political questions raised by the significant gaps in Capitol security that were exposed when insurrectionists supportive of Trump stormed the building on Jan. 6.

“It’s going to take more money to protect the Capitol in a way that enables people in a way to come here, children to come and see our democracy in action, all of you to cover what happens here safely, members to be comfortable that they are safe,” Pelosi said at her Thursday press conference.

Indefinitely extending the National Guard’s stay is likely to become a flashpoint on Capitol Hill, where lawmakers — primarily Republicans — have demanded that leaders scale back the intensive security measures imposed after the Jan. 6 assault. Lawmakers from both parties have demanded briefings on the security threats to the Capitol.

“No one likes seeing the fortress-like security around the Capitol. And no one wants to again have a security problem in and around this symbolic place,” Rep. Elissa Slotkin (D-Mich.), a former intelligence analyst, said Thursday morning. “Whether an extension has been requested or the mission is indeed terminating on March 12, it’s critical that members of Congress get a briefing on what’s behind these decisions.”

Pelosi said she hoped that retired Lt. Gen Russel Honoré — whom she’s tasked with a review of Capitol security measures — will be able to present his draft recommendations to the full House next week.

“With all the president’s men out there, we have to ensure with our security that we are safe enough to do our job,” Pelosi said, referring to Trump supporters who stormed the Capitol on Jan. 6.