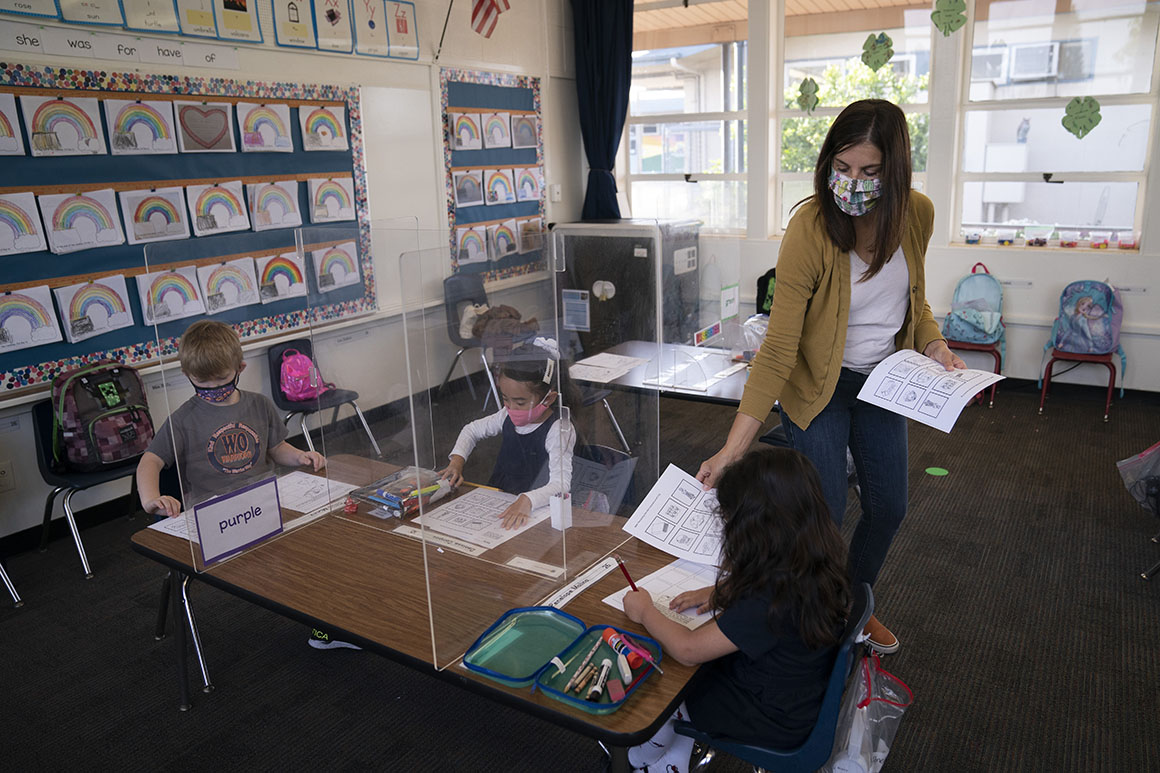 Daniels said LAUSD’s reopening plan asks teachers to choose between “our children or our job.”

Unions across California say the need for educator childcare was a problem before the pandemic, reflective of broader policy gaps that support women and working families.

The petition has more than 2,000 signatures and suggests that waivers be given to teachers with young children so that they can continue working remotely in distance learning for now, and that childcare be provided by the fall. While Los Angeles Unified offers some childcare options, the program does not have the capacity to support kids under five years old or those enrolled in other districts, according to UTLA.

UTLA, which represents the second largest school district in the country, has not made childcare a condition of reopening. Los Angeles Unified plans to return some of its youngest students to classrooms starting April 12, with half-day shifts.

But the union is calling on the district to provide options to educators, and for the state legislature and congress to “proactively work to provide better childcare support for all working families in California,” pointing out that women make up about 70 percent of the profession.

“As millions of working families — including frontline workers in hospitals, grocery stores, food processing plants, sanitation, transportation and other professions — have been forced to leave home for work and scramble to find childcare throughout the pandemic, it’s become more clear than ever that we as a society must do more to provide affordable childcare options for families with children too young for school,” UTLA said in a statement.

A spokesperson for Los Angeles Unified said in an e-mail Tuesday the district had no updates on the childcare ask.

While most of California’s 1,000-plus school districts have reopened or have a plan to by this month, tensions continue to boil as parents fight for more in-person instruction. Most California districts have adopted hybrid plans that still incorporate distance learning, and unions have spent the past year fighting for increased safety protocols that include vaccine access for educators and lower community case rates before resuming in-person instruction.

Teachers unions have been trying to avoid an “us vs. them” mentality with parents since the pandemic hit in March and say that narrative is unfair, especially for teachers who are also parents. Nearly half of all public school teachers have children living at home, according to a report by Chalkbeat.

“Teachers have been doing their best and many have had the same experiences as parents during the pandemic. They’ve been teaching from home while also attending to their children, and they know exactly what parents are going through,” said Patrick Bernhardt, president of the San Jose Teachers Association.

But the emotional debate surrounding reopening schools in California hasn’t made it easy for some teachers and parents to agree.

California teachers concerned for their safety fought back against pressure to return to classrooms when Covid-19 was in full force, arguing that they aren’t childcare providers. In February, Bay Area school board members resigned after a hot mic caught officials lamenting parent complaints about distance learning, with Oakley Union Elementary School Board President Lisa Brizendine recorded saying that parents “want their babysitters back.”

While SJTA’s contract includes a policy that allows teachers to bring their dependent children to Childcare has long been an issue for California educators, who often do not meet the income threshold for subsidized care but still struggle financially in big cities where the cost of living has skyrocketed.

Our must-read briefing on politics and government in the Golden State.

“We’ve been working for our districts and the state to find a way to potentially make seats available for employees, but have been unable to pull that off,” Bernhardt said. “It’s been a concern for a long time.”

The demand is especially tricky as California grapples with a growing child care crisis. Even before the pandemic, the state struggled to provide enough spots to young children who qualify for subsidized care.

The coronavirus made things worse. Operating costs to keep up with safety protocols increased, while providers lost income as families unenrolled. According to the Center for the Study of Child Care Employment, 77 percent of programs in California experienced loss of income from families in 2020.

Thousands of providers in the state have been forced to close and say they cannot reopen without financial assistance from the government. President Joe Biden has pledged billions to stabilize the childcare industry.

Service Employees International Union Local 99, which represents classified school employees including cafeteria workers and custodians, plans to propose this week that Los Angeles Unified offer all employees, including teachers, a child care stipend, according to Blanca Gallegos, a spokesperson for the union.

Gallegos said calls for more state and federal funding for childcare will continue, as California starts to reopen.

“Childcare is critical and essential for people to go back to work and for the state to recover,” Gallegos said. “Childcare is necessary.”