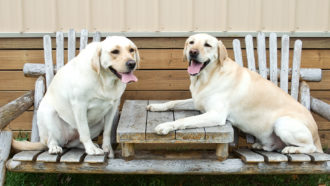 To estimate your dog’s age in human years, multiply the dog’s age by seven, right? Wrong.

A more accurate conversion isn’t so easy to do in your head: Multiply the natural logarithm of the dog’s age by 16, then add 31. Researchers report this new canine age formula online July 2 in Cell Systems.

As animals get older, tiny chemical tags called methyl groups get added and removed from DNA. These changes track with different stages of growth and can be used to determine biological age. Scientists can even compare changes across species. In this case, the researchers compared the methylation states of 320 humans, ages 1 to 103 years, with those of 104 Labrador retrievers, ages 5 weeks to 16 years.

The relationship between human and dog years changes over time, the scientists found. Early in life, puppies develop much faster than humans, but as dogs get older, their aging curve begins to flatten. An 8-week-old puppy is roughly the same age as a 9-month-old human. A 1-year-old dog corresponds to around 31 human years, and a 4-year-old dog is closer to a 53-year-old human. The new equation also lines up the average life span of a Lab — 12 years — with the average 70-year human life span.

The study focused only on yellow Labrador retrievers. Since the life spans of other breeds vary, further studies are needed to find out the real age of every very good dog, the scientists say.