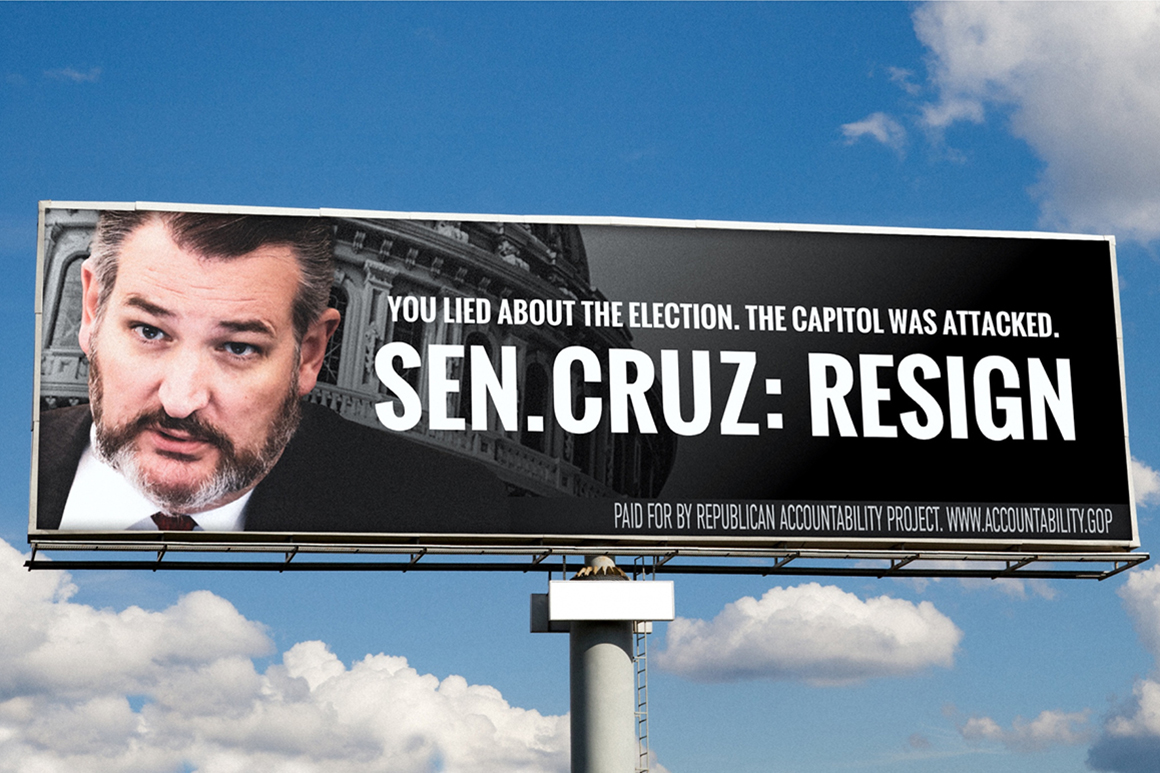 The billboard target list is composed of “people who are the most enthusiastic about lying to their constituencies about the election being stolen,” said Sarah Longwell, executive director of the Republican Accountability Project. “The goal is to not allow these officials to memory-hole the fact that they pushed this lie, which incited the attack on the Capitol.”

“It took a lot of players within the Republican party to convince the vast majority of their voters that the election was fraudulent,” Longwell added. “We are here to be an institutional memory of what happened and who said what.”

The billboards will be placed in each House member’s district, as well as in multiple cities in Texas and Missouri targeting Cruz and Hawley. Thursday’s launch is the first phase of the $1 million campaign, with additional billboards set to launch soon after. Cruz and Hawley aren’t up for reelection until 2024.

“There’s this whole segment of the population still out there who believes the election was illegitimate,” said Olivia Troye, a former national security advisor to Mike Pence, who is now director of the project. “And they’re going to continue to believe that until these people are held accountable, or they resign and it’s acknowledged that this was a lie.”

A video released Thursday night by the Republican Accountability Project compiles examples of Cruz, Hawley, Jordan, McCarthy and the other Republicans claiming without evidence that the 2020 election was tainted. The group will run it as an ad during Fox and Friends and Sean Hannity’s show all next week in each member’s congressional district and in Cruz and Hawley’s states.

Neither Longwell nor Troye is optimistic that 17 Republicans will join Democrats to convict Trump in the Senate impeachment trial. But they both said that voters and lawmakers need to be reminded of what happened on Jan. 6.

Longwell expressed frustration with Republicans’ calls for Democrats to drop the trail in the name of “unity.”

“They have a mantra of move on but we’re not going to let them move on,” said Longwell. “Accountability is a prerequisite to unity.”