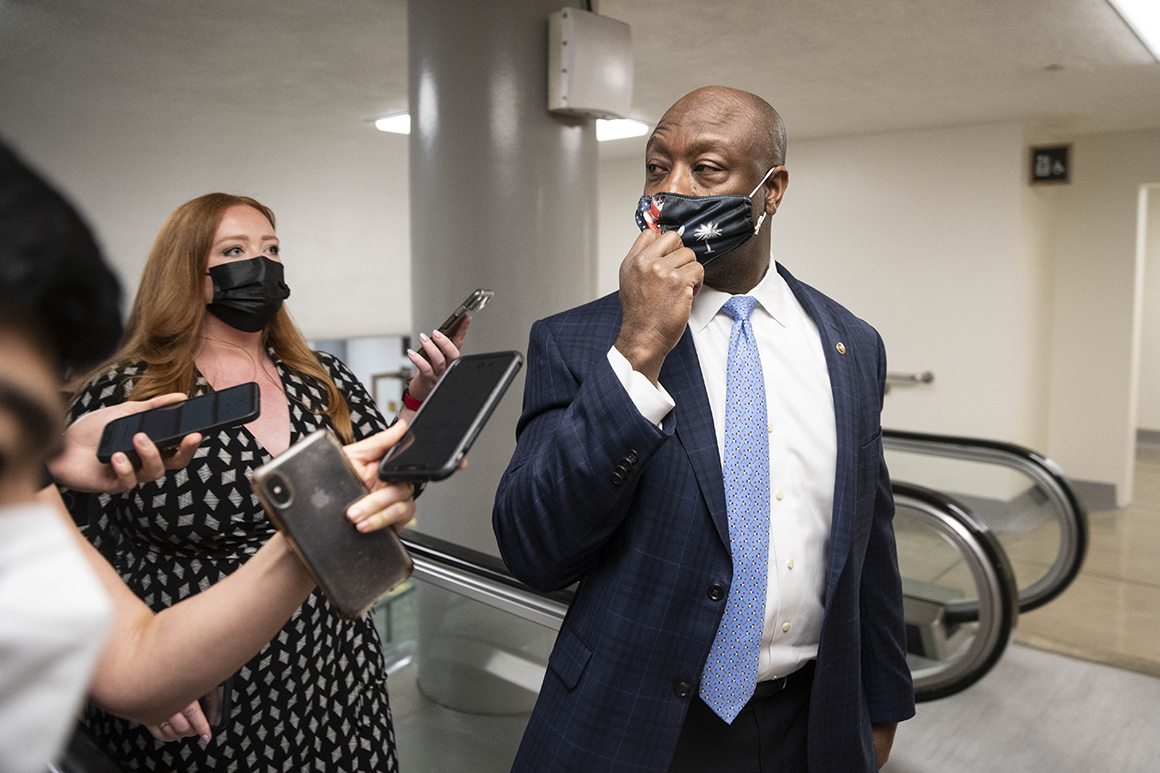 Fifteen minutes after Biden finished, Scott began his remarks, focusing on themes of hope and opportunity and drawing from his own personal experiences of growing up as a Black man.

“Nowhere do we need common ground more desperately than our discussion of race,” Scott said. “I have experienced the pain of discrimination. I know what it feels like to be pulled over for no reason, to be followed around the store when I am shopping.”

“Hear me clearly: America is not a racist country,” he added. “It’s backwards to fight discrimination with different types of discrimination, and it’s wrong to try to use our painful past to dishonestly shut down debates in the present.”

Scott also criticized Biden for a perceived mismatch between the president’s rhetoric and his actions. Biden has frequently spoken about a desire for bipartisanship, but he has not seen Republican support on major legislation, such as his Covid relief package.

“Our nation is starving for more than empty platitudes,” Scott said. “We need policies and progress that brings us closer together. But three months in, the actions of the president and his party are pulling us further and further apart.”

Scott also nodded to former President Donald Trump in his remarks Wednesday, praising the previous administration for its work on Operation Ward Speed. Biden, who earlier said he “inherited a nation in crisis,” had actually “inherited a tide that had already turned,” Scott responded.

Scott, who has been the GOP’s main negotiator on police reform in Congress, hit his Democratic colleagues for blocking his police reform legislation last year.

“My friends across the aisle seemed to want the issue more than they wanted a solution,” he said. “But I’m still working, I’m hopeful that this will be different.”

In recent weeks, Scott has been in talks with Sen. Cory Booker (D-N.J.) and Rep. Karen Bass (D-Calif.) to reach a consensus on police reform legislation that both parties would back. However, the issue of qualified immunity for officers has complicated those efforts.

Efforts to pass police reform were galvanized last year, when the murder of George Floyd, a Black man, by a white Minneapolis police officer sparked nationwide protests. During his address, Biden urged lawmakers to act quickly and pass legislation by next month, which would coincide with the first anniversary of Floyd’s death.

When asked a day earlier about his preparations, Scott said on Tuesday that he had “lots of input” on his rebuttal speech from those who have done it in the past, such as Sen. Marco Rubio (R-Fla.) and former Rep. Joe Kennedy (D-Mass.).

Sen. Joni Ernst (R-Iowa), who responded to President Barack Obama’s State of the Union address in 2015, called Scott “the right voice at the right time” on Tuesday.

Those tapped to deliver the response to the president are often considered rising stars within their party, and Scott’s address puts the national spotlight on a senator who prefers to be under the radar.

There were no notable gaffes in Scott’s response, an issue that has plagued past politicians who have taken on the role. In 2009, Bobby Jindal, a rising Republican star who was Louisiana governor at the time, was criticized for his amateur delivery in a speech that opened with “Good evening, and happy Mardi Gras.” Rubio himself faced ridicule in 2013 after lunging for a water bottle to take a sip mid-speech.

Scott, 55, was first elected to the House in 2010. Three years later, he became the state’s first Black senator after then-Gov. Nikki Haley appointed him to replace Jim DeMint, a Republican.

He is frequently known as the lone Black Republican senator and is the current chamber’s longest-serving Black member. His racial identity and conservative politics have made him a rarity in Congress, where he hasn’t been afraid to lean into both, even when one might sometimes come at the expense of the other.

Scott has spoken openly about his own experiences with race. In 2016, he shared on the Senate floor multiple instances in which he felt discriminated against because of the color of his skin, including being stopped by a U.S. Capitol Police officer who did not recognize him as a senator even though he was wearing his lapel pin identifying him as such.

At times, Scott also tussled with President Donald Trump over his rhetoric on race. In 2017, he sharply rebuked Trump’s equivocating in response to the Unite the Right rally in Charlottesville, Va. The two later met at the White House for a roughly 40-minute meeting to hash out their differences.

“He is who he has been, and I didn’t go into it to change who he was,” Scott told POLITICO at the time. “I wanted to inform and educate a different perspective. I think we accomplished that. To assume that immediately thereafter that he’s immediately going to have an epiphany is unrealistic.”

South Carolina’s junior senator also notably sank Trump judicial nominee Thomas Farr in 2018 over his voting rights record and called on the GOP to “do better” on racial issues. And while many of his Republican colleagues did not issue statements after the Derek Chauvin trial earlier this month, Scott did.

Despite his occasional breaks from Trump and his party, Scott has also rallied behind the former president. After the Jan. 6 insurrection at the Capitol, he said Trump was “simply not guilty” of inciting the events that day.

“The one person I don’t blame for that situation is President Trump,” he said on Fox News.

Although Scott has said that 2022 will be his last political race, he is frequently considered a potential 2024 contender for the Republican presidential nomination.