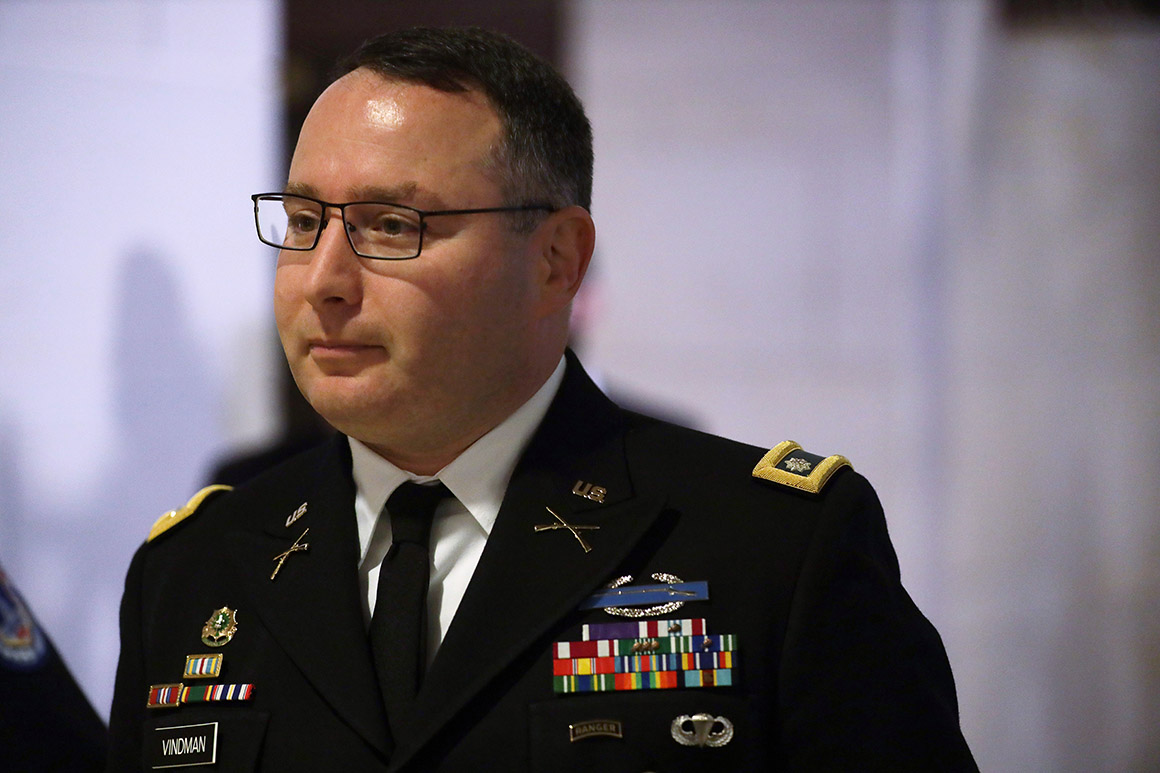 A key witness in the impeachment of President Donald Trump has retired from the military following “a campaign of bullying, intimidation, and retaliation,” his lawyer said in a statement on Wednesday.

Lt. Col. Alexander Vindman, who until February served as the top Ukraine policy officer on the National Security Council staff, retired after it became clear that he would be unable to progress in his career, his attorney David Pressman said.

Vindman testified late last year in the impeachment inquiry, telling lawmakers that he raised alarms internally about Trump’s call with the Ukrainian president in which Trump appeared to make continued U.S. aid to Kyiv contingent upon an investigation of Joe Biden and his son.

The officer’s testimony infuriated Trump and his allies, who attacked Vindman’s credibility and questioned the Iraq war veteran’s patriotism and honesty. Trump called Vindman “insubordinate” in a February tweet, just after Vindman and his twin brother Yevgeny, who also worked at the White House but was not an impeachment witness, were transferred early from the NSC.

“Fake News @CNN & MSDNC keep talking about ‘Lt. Col.’ Vindman as though I should think only how wonderful he was. Actually, I don’t know him, never spoke to him, or met him (I don’t believe!) but, he was very insubordinate, reported contents of my ‘perfect’ calls incorrectly, & was given a horrendous report by his superior, the man he reported to, who publicly stated that Vindman had problems with judgement, adhering to the chain of command and leaking information. In other words, ‘OUT,’” Trump wrote.

Fiona Hill and Timothy Morrison, the former senior directors for Russia and Europe on the NSC, were Vindman’s direct supervisors from 2017-2019. Neither said Vindman had problems leaking information — Morrison testified only that he had heard chatter about that from colleagues — and Hill wrote in a performance review that Vindman displayed “excellent judgment.” Morrison did express frustration that Vindman went around him, to the White House counsel’s office, to raise alarms about Trump’s Ukraine call.

“His performance was exceptional. So was the performance of his twin brother who was in a different capacity at the NSC. You know, it was just as unacceptable for … Alex Vindman to be singled out, even worse in a sense for his brother whose only sin, as far as I can tell, is that he was his twin,” Bolton said. “We don’t know what his brother’s fate is, but for Alex Vindman to retire from the military after it must have been 21, 22 years now, is really a loss for the country.”

The White House attempted at least once to turn the Pentagon against Vindman. At the White House’s request, the Department of Defense inspector general opened a preliminary inquiry into “allegations of inappropriate behavior” against Vindman, said one U.S. official familiar with the discussions. But after quickly completing the inquiry, the IG found no substantiated claims, and no reason to hold up his promotion, the official said.

Following the inquiry, Army Secretary Ryan McCarthy recommended Vindman be promoted to colonel, the official said. McCarthy included Vindman’s name in a list of officers recommended for promotion he submitted to the office of the secretary of defense on Thursday, according to a senior defense official.

On Monday, Defense Secretary Mark Esper signed off on Vindman’s promotion, along with the other officers on the list, the senior defense official said. The list was slated to be submitted to the White House for approval at the end of the week.

“The DoD part of this was done,” the official said, noting Esper’s comments that Vindman’s military career was not in jeopardy over his role in the impeachment inquiry.

“He shouldn’t have any fear of retaliation,” Esper said at the time.

Duckworth, a retired Army officer who lost both legs while serving in the Iraq war, ripped Esper on Wednesday and said he failed to shield military personnel "against a vindictive Commander in Chief."

Even with Vindman leaving the service, the Illinois Democrat said she’ll continue to hold up the 1,123 senior military promotions until she receives "a transparent accounting of this disgraceful situation" from Esper.

"Secretary Esper’s failure to protect his troops sets a new, dark precedent that any Commander in Chief can interfere with routine merit-based military promotions to carry out personal vendettas and retaliation against military officers who follow duly-authorized subpoenas while upholding their oath of office and core principles of service," Duckworth said.

Pressman said Vindman was “thrust into” the conversation after being compelled to testify before Congress.

“Over the last months, LTC Vindman has been guided by a very simple and very American principle: ‘Here, right matters,’” Pressman said, quoting from Vindman’s testimony. “Through a campaign of bullying, intimidation, and retaliation, the President of the United States attempted to force LTC Vindman to choose: Between adhering to the law or pleasing a President. Between honoring his oath or protecting his career. Between protecting his promotion or the promotion of his fellow soldiers. These are choices that no one in the United States should confront, especially one who has dedicated his life to serving it.”

Vindman, who was one of a handful of senior officials who listened in to the president’s call with Ukrainian President Volodymyr Zelensky last July, testified that he brought his concerns to White House lawyer John Eisenberg, who declined to testify in the impeachment inquiry. Eisenberg and his deputy Michael Ellis ultimately decided to move the record of the call into the NSC’s top-secret codeword system — a server normally used to store highly classified material that only a small group of officials can access.

A few weeks after the July 25 call, a whistleblower’s concerns about the conversation and events leading up to it made their way to the CIA’s general counsel and, finally, to Intelligence Community Inspector General Michael Atkinson, who was also fired by Trump in April. Atkinson said he believes he was ousted because of his decision to relay the whistleblower complaint to Congress.

“LTC Vindman did what the law compelled him to do; and for that he was bullied by the President and his proxies,” Pressman said. “And yet, LTC Vindman would not be intimidated and will not be corrupted. He did what he has always done: put the interests of his country ahead of his own. LTC Vindman’s patriotism has cost him his career. Today our country loses a devoted soldier, but it is incumbent upon all of us to ensure it does not lose the values he represents.”